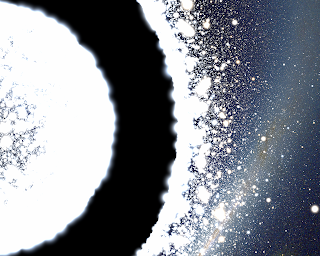 Wyrmholes
An unusual phenomenon seen at times throughout the galaxy is these disturbances of space itself. Each one looks like a dark ring shrouded by pulsating energy and filled with the same. It is, essentially, a portal that connects two points in space, ones that can be separated by an unlimited distance; in that way it acts like a dimension door spell, albeit one with unlimited range. What is more, wyrmholes work with the following guidelines.

Posted by Nate Christen at 9:09 PM