Building on the last post, here's the top level of the minotaurs' labyrinth. 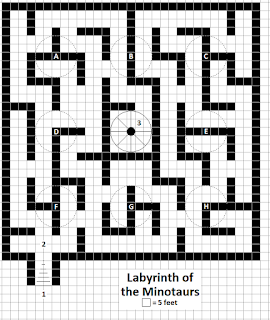 The Labyrinth
The most notable structure on the island is, of course, the minotaurs' labyrinth. While it is hidden beneath the ground, the entrance itself is neither concealed nor guarded; rather, the cruel and cunning bull-men delight in tempting incautious travelers to enter, so that they can savor watching them suffer once they're trapped. Indeed, such is the anguish some victims have experienced, that the labyrinth is even home to a will-o'-wisp that feeds on such negative psychic energy.

Will-o'-wisp: Refer to page 277 in the Bestiary for details.

Refer to the maps below for the following area descriptions. For the most part, the labyrinth is a pretty straightforward maze, with walls that form a convoluted rectangular pattern. They are stone of roughly five feet thickness, giving them hardness 8 and 900 hit points. The exception to this is that in eight places (inside dotted circles and marked with letters) the walls can pivot, changing the shape of the maze and thereby confounding those who are trapped in it. The aforementioned quasits revel in using their telepathy ability to coordinate such confusion.


Perhaps surprisingly, the entrance to the labyrinth is plainly visible at ground level; this is because the cunning and wicked bull-men enjoy letting victims venture into it so that they can be tormented.

2. Passageways
Inside the labyrinth, the ceilings are fifteen feet high and the walls are made of stone five feet thick (hardness 8 and 900 hit points). While most of the labyrinth is a typical underground maze, there is an exception: In eight different places—marked with letters from A to H—the sections of walls can pivot in ninety-degree increments so as to change the flow of the passages. With help from the quasits and their telepathy, the minotaurs use these sections to torment those who venture into the labyrinth.

3. Stairwell
In the center of the maze, a wide spiral staircase leads down to the lower level, the minotaurs' stronghold.