Here's a map of the Holy City, along with a settlement stat block and area descriptions. 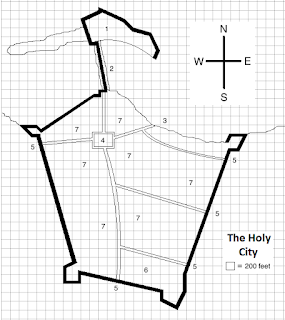 The Holy City
On Homeworld, the largest temple of the Universal Architect is located in a coastal city known fort its strong harbor, daring captains and thriving trade. Known far and wide as the Holy City, it sits on the shore of a massive inland sea. Groundling vessels make their way hence, carrying trade goods, merchants, missionaries and settlers to all parts of the world. What is more, aetherships come and go more frequently there than anywhere else on Homeworld, given the desire of the Universal Architect's followers to explore the solar system.


1. Islet
Part of the protection for the city's harbor is formed by this small island, which lies about a quarter of a mile offshore. Much of the natural body has been covered with a small fortress, one that boasts a lighthouse for guiding ships along with siege weapons for defending the area.

2. Mole
Built stone by stone with the force labor of convicted criminals, this artificial spur completes the protection for the city's harbor. A crenelated road runs it length, allowing traffic to and from the fortress on the islet.

3. Harbor
Given the previous two structures, the Holy City's harbor can protect vessels from all but the worst of storms. Usually at least one galley is located here at all times, providing a first line of defense against attack vessels. Additionally, any approaching aetherships are directed to land in the water beyond the mouth of the harbor, with severe penalties for failure to do so. Inside the harbor, along the shoreline, numerous piers jut into the water, providing places for boats to load or unload cargo and passengers.

4. Marketplace
Just up a short road from the harbor is the city's main marketplace. While there are many smaller ones—including some covered marketplaces, or suqs, where illicit goods are more likely to be found—none is as large or as vibrant as this one. Some three hundred feet wide and five hundred in length, it is filled with tents, stalls and other such arrangements for presenting food, equipment and other goods. This place is a hub of activity from before sunrise until after sundown, at which point business and entertainment shifts to indoor locations.

5. City Gates
Five different roads lead out of the city, either along the coastline or into the continent's interior. Each is guarded by a gate, where city officials and their enforcers examine newcomers and assess taxes on the goods that they carry with them.

6. Temple
The religious heart of the city is this shrine to the Universal Architect; see below for more details.

7. Captain's Houses
Each of the seven captains who form the ruling council for the Holy City has an impressively lavish home. Once again, see below to find the layout and description of one such domicile.

Posted by Nate Christen at 4:26 PM