The Ratfolk of the Grotto

Curiously, I'm posting this article a year to the day after first posting about the Grotto. (And, yes, I am shamelessly reusing maps again.)

The Ratfolk of the Grotto
A previous article introduces the Grotto, a hollow asteroid filled with water that features a tavern, inn and brothel, the Sign of the Cup and Loaf. Among the eclectic mix of travelers and regulars who inhabit the place is a pack of ratfolk who serve as custodians for the place. What most people don't know, however, is that they are also a band of thieves. Under the unseeing eyes of other, larger people, they slowly gather any and all useful items and information that others leave unprotected. 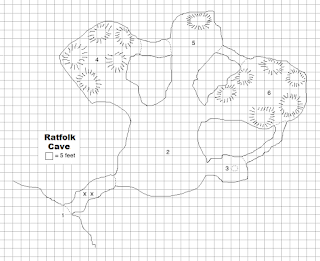 The Ratfolk Lair
With its entrance located beneath the rightmost of the piers on the asteroid's artificial lake, this series of caves allows the ratfolk to live and work in the heart of the settlement's activity, all while not attracting undue attention. Refer to the map below for the following location descriptions.

Note: For a map of the Grotto, refer to that post for details.

1. Entrance
The mouth of this tunnel is some seven feet wide and of roughly five feet in height. It is entirely covered by the artificial lake, making it particularly difficult to notice (DC 25 Perception check). From there, a tunnel cut out of the rock leads up above the waterline. Note, too, that there is a spiked pit trap (refer to page 420 in the core rulebook) in the two squares marked with X's on the map. What is more, to make this trap more dangerous for higher-level parties, the GM might want to have the spikes be poisoned with an appropriate venom or other kind of toxin (see Table 16-2 on page 559 of the core rulebook for options).

As a general rule, tunnels in this cave network are as tall as they are wide; other chambers have a height of roughly half their width.

2. Main Chamber
This is where the ratfolk keep all of the general goods that they “find.” Most of it is junk, little more than shiny baubles that attracted their attention. To determine the nature of a random item, simply use the “Minor” column from Table 15-2 from page 461 of the core rulebook, but have all items be mundane in nature. At the GM's discretion, there is a 1-in-20 chance of an item actually having magical properties, with only one such item being present. There are also casks of water and various foodstuffs; refer to Table 6-3 on page 140 in the core rulebook for examples.

3. Midden Pit
Ratfolk have a very narrow definition of the word “trash,” but this hole (roughly four feet wide and twenty feet deep) is where they discard old bones, broken glass, spoiled foodstuffs and whatever else they deem apprporiate. At the GM's discretion, it could be home to a swarm of vermin.

4. Females' Den
The most notable feature of this area are five beds made from pieces of cloth, straw and other such materials. Each of these is occupied by one of the five females in the pack. Most notably, any items of legitimate value—coins, gems or magical items—that they don't carry on their persons are hidden in these beds.

5. Den of Nartamus and Lyram
A single large bed dominates this room. That is because it is home to Nartamus and Lyram, the leaders of the pack. In addition to their items of value, stored beneath their bed is a book in which the two ratfolk have written tidbits of information—both things that the rogues who serve Nartamus have overheard in the course of their activities, and additional details that Lyram has been able to glean from her divination magic.

The exact nature of that information is left up to the GM, in order to add any plot hooks as needed to meet the desires of the players and the needs of the campaign. For example, this might include something overheard by a boastful pirate while he was drunk, notes from a secret meeting of the Royal Interplanetary Company or a similar oganization, personal secrets from any number of individuals, and the like.

6. Males' Den
This location is very much the same as the den for the females (Area 4), above, except that there are six beds that are occupied by the males. Once again, any valuable items they possess but do not carry are hidden in the piles of cloth and straw.

Inhabitants
To find statistics for the various members of the ratfolk pack, refer to pages 178-81 the Monster Codex.

Using the Ratfolk in an Aetherial Adventures Campaign
There are plenty of ways in which these rogues can become involved in the events of a space fantasy RPG campaign; presented here are a few of the possibilities. 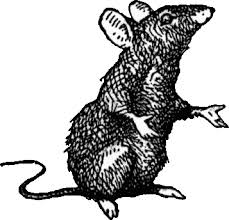 Posted by Nate Christen at 5:18 PM