I'm including this review on the blog because I think these three novels would appeal to fans of the old Spelljammer campaign setting. That is, in fact, the reason why I tried out this series in the first place, since I was looking for space fantasy novels. While they weren't entirely what I expected, in the end I enjoyed them quite a bit. 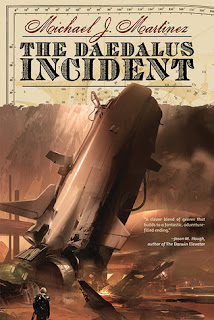 The first novel, The Daedalus Incident, starts with two parallel storylines. One is the aforementioned space fantasy type, an alternate history in which the New World does not seem to exist on Earth, and the Age of Exploration took humans into space aboard alchemically-treated wooden sailing ships. The story uses a main character's journal entries for a lead-in, and then creates an interesting setting with engaging characters and action. The parallel storyline, however, takes place in a realistic sci-fi future on the planet Mars, In that setting, the main character finds the journal, which has writing appearing on its pages. The two storylines are gradually interwoven in a plot involving extra-dimensional powers, and builds into a slam-bang finish. 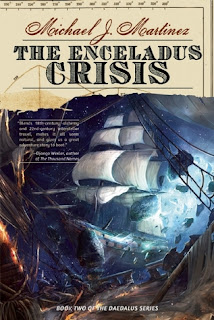 The second novel, The Enceladus Crisis, takes this premise one step further by splitting up groups of characters into four separate storylines, While this might seem overly complicated, in fact the author does a good job of using all four streams to weave a complicated but engaging plot. There are likable characters, too, making for a read that grabbed my interest and held it. 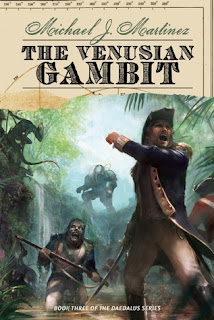 Finally, the last in the series, The Venusian Gambit, brings everything to a satisfying and exciting conclusion. Throughout the series there were surprises, but no disappointments. All in all, I found myself wishing that there was an RPG campaign setting for these novels so that I could play a character in its worlds. (On that note, I think Pirates of the Spanish Main could be a good ruleset to use for such an undertaking.) I recommend these novels strongly for anyone who enjoys space fantasy, but I think that harder sci fi fans would enjoy them, too.

Posted by Nate Christen at 5:43 AM