There are all kinds of entertainments available in a sizable port city. While taverns and brothels are usually the first to catch a sailor's attention, there are also traveling bards and perhaps even more organized types of shows. One that appeals to a particular crowd, however, is the fighting pit. An enterprising young adventurer who didn't really take to the adventuring lifestyle, Thayer took the gold that he earned during his brief career and used it to buy a rather ordinary warehouse close to the docks. That structure he then refurbished, digging out a basement, building quarters for competitors and then adding two levels from which patrons can watch the fights. 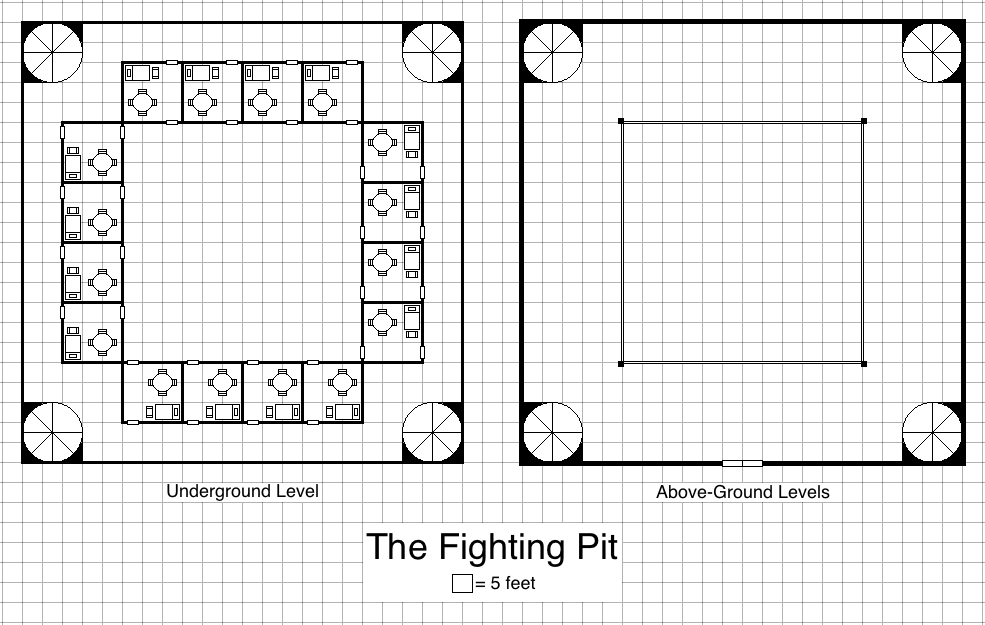 The Fighting Pit
Broad double doors provided access to the warehouse at street level. The building itself is two stories above ground. Those two levels have been gutted of everything but support pillars, a railing to prevent spectators from falling into the pit, and a spiral staircase in each corner that provides access to the other levels. The pit itself is sixty feet on a side, with a floor of packed dirt and sand. It is surrounded on the underground level by sixteen small rooms, where combatants can prepare for, and recover after, matches.

Running Matches
Entry for a night's entertainment costs 5 sp. Given that it's standing room only, positions against the railing are on a first come, first served basis only. Each bout pits two competitors against each other in single combat. In game terms, this can be handled in much the same manner as typical Pathfinder battles. Matches are fought to incapacitation, so there's usually a chance that the loser can recover. Thayer keeps a cleric on hand, too, to provide healing for the defeated. Although the combatants are permitted to use any magic that they might possess, no outside participation or interference of any kind is permitted. That rule is enforced not only by Thayer and his heavies, along with a hired wizard named Ancalimë, but also by the spectators, especially those who have wagers on one combatant or another.
At the end of the night, Thayer keeps half of the proceeds for distribution to his employees and profit; the other half is divided among the competitors.

Betting on Fights
On the subject of gambling, it is permitted. While there is not technically a limit on wagers, they don't generally exceed ten gold pieces per fight. Because Thayer and his heavies don't wish to be bothered by keeping track of this business, it is standard practice for the two participants in a bet to have a third party observe the transaction.

Personnel
At any given time, Thayer and a dozen or so guards are present to make sure that things run smoothly.

Sylvio Thayer loves nothing more than a good fight. What he did not love were the privations that adventurers had to suffer as part of their lifestyle—sleeping outside on the hard ground, subsisting on trail rations and limited quantities of ale, and the like. That's why he retired from that profession, choosing instead to invest his hard-earned money in this fighting pit. Now he can enjoy as much fighting as he is able to arrange, while still living comfortably in town.

These fellows have a fairly cushy job that lets them show off a little bravado without actually facing much danger; it suits them well. They are given to bluster, but can be overwhelmed by a real show of martial prowess.

Brother Fain worships the Goddess of Mercy, bringing her blessing to those in need of healing. Sometimes he struggles with his job as healer for a fighting pit, given that those who engage in combat aren't doing it for any cause higher than that of earning some money. For that reason, he sometimes dreams of finding a band of adventurers and joining their efforts to dome some real good in the world.

At first glance, it might seem unusual that a wizard (and a diviner at that) is involved in business like this fighting pit. While it's true that the half-elf's job is to monitor spectators and competitors alike to prevent the use of magic in the fights, Ancalimë also uses the opportunity to pry into the minds of those who are present. So far he has just done so for his own amusement, but it won't be long before he learns something really important and decides to use this tidbit for his own gain.

Using the Fighting Pit in a Nautical Fantasy Campaign
There are many ways in which this establishment could become involved in a nautically-themed Pathfinder campaign; a few of the possibilities are detailed here.

Posted by Nate Christen at 7:04 AM