The Puzzle 2 (and Other Stuff)

In addition to presenting a new interlude, I want to mention that the website Under the Black Flag has been revised. Among the features on it are links to four full-length old pirate movies online.

A previous interlude presented a cryptic puzzle, one that they could decipher by visiting the grave of Lady Rose. Upon doing so, they were steered toward Rose Point on the island of Martinique. This interlude can occur as they pursue that lead.

Searching Rose Point
Ultimately, the PC's need to succeed at a DC 20 Search or Spot check to notice that, at low tide, an exposed boulder amidst a tumble of such rocks is engraved with a small image depicting a stylized five-petaled flower. That is, of course, a rose. Behind the boulder, a narrow tunnel leads back into darkness. Of course, the GM might wish to throw one or more encounters at the PC's while they are searching; refer to the appropriate tables for suggestion.

The Cache
Refer to the appropriate map for the following location descriptions. 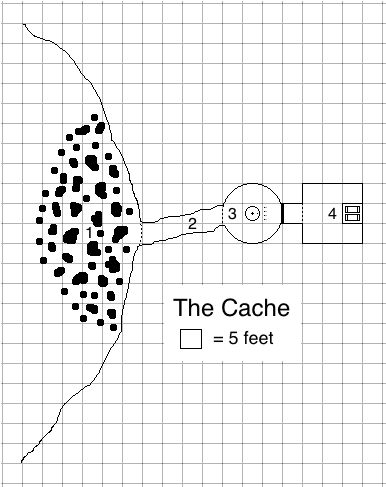 1. Boulders
This tumble of rocks counts as difficult terrain when moving across it, unless a character succeeds at a DC 15 Tumble check to jump from boulder to boulder. Failing such a check by five or more means that a character trips and falls prone. As mentioned above, one boulder is engraved with the symbol of a rose. What is more, anyone who enters the area attracts the attention of a local beast. (Here again, refer to the appropriate table for suggested foes.)

2. Tunnel
This tunnel is about five feet wide and of a similar height. It leads upward at a considerable slope, up to a point above the high tide mark.

3. Mechanism
This round room has been built up with a flagstoned floor and walls, and timbers support the ceiling. In the middle of it is a broad circular stone similar to a millstone, lying on the floor, with an axle in the middle and a handle for turning it. What is more, four levers are arranged in front of it, with slots which clearly show that they are pulled toward the wall opposite the entrance. Finally, a DC 10 Search or Spot check reveals that a door is concealed in that same wall.

In order to open the door, the PC's must turn the stone in the correct direction for the letters that spell R - O - S - E, in that order, pulling one lever (from left to right) for each. The correct sequence opens the secret door, while any incorrect attempt triggers a trap. In theory the PC's could just set off a powder keg against the secret door to blow it open, but--at the GM's discretion--this could damage some of the treasure, or even trigger a cave-in.

4. Vault
Beyond the secret door is a cubical chamber with a raised platform at the far end. On the platform sit two treasure chests. The GM should tailor their contents to fit the wants and needs of the party, along with the levels of the PC's and the difficulties that they have faced in recovering it.

Posted by Nate Christen at 9:54 AM