This Interlude introduces a character that can provide all kinds of adventure hooks, a writer who seeks to chronicle the tales of real-life pirates. I like the NPC in part because he represents what I think I would do aboard a pirate ship back in the day.

Interlude 36: The Writer
During the Golden Age of Piracy, it was not uncommon for a person of a literary bent to spend some time among the buccaneers and scallywags of the world in hopes of writing a book about them. Take, for example, two very popular compilations, The Bunccaneers of America by Alexander Esquemeling and A History of the Robberies and Murders of the Most Notorious Pirates by Captain Charles Johnson. The prior book focuses on the buccaneers who were active during the time of Henry Morgan and other Brethren of the Coast, while the latter focuses on those who sailed around the time of Blackbeard and various members of the Flying Gang. Esquemeling wrote his book after spending considerable time among the buccaneers, while Johnson conducted extensive interviews but is not believed to have served on a pirate crew. In both cases, however, the books were runaway successes, with readers thrilling to the swashbuckling adventures and wicked misdeeds of the characters chronicled. 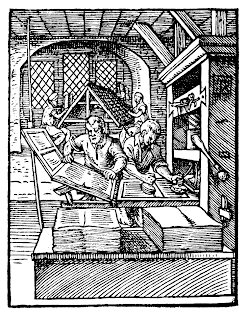 With that in mind, the PC's and their allies, once they have established themselves as notable pirates, somehow manage to attract the attention of a writer named Durwin Oswald Chatwick. He is an eager reader of adventure stories and of a mind to write some of his own--or somebody's stories, at least. (Think of the character John Reed from Cutthroat Island for an example of this type of character.)

Durwin Chatwick is an amicable fellow who is robust but rather soft. He enjoys nothing more than a rousing tale, with a glass of ale, in comfortable surroundings. As such, while he himself would not make a good pirate, he thrills to other peoples' stories of derring-do. That is why he has decided to come to the Caribbean and seek out those who have lived such lives, in order to chronicle their exploits and thus win a name for himself.

Using the Writer in a Campaign
Chatwick could find any number of uses in a Skull & Bones campaign; a few of the possibilities are detailed here.
Posted by Nate Christen at 2:52 PM