Given their nomadic lifestyle, the shobhads do not build large structures in the manner of the kasathas; rather, they dwell in tents made from the hides of the creatures they use for mounts, always moving from place to place. While their migrations are difficult to predict, chances are good that they settle around the numerous wells that they have found and dug throughout the desert. 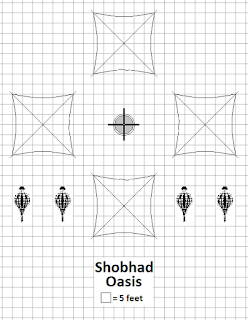 An Oasis
A typical shobhad encampment has three major features. In the center of everything is the well, a broad circular excavation that can be covered with a protective tarp, and with a four-legged structure raised over it to protect against blowing sand when it's not in use. That structure includes a block and tackle with a rope for lowering and raising large buckets. Spaced around the well are large pavilion tents, each home to either a pair of warriors or a family. Finally, the shobhad's mounts are tethered in a location such that the tents provide some protection against blowing wind and sand.

Shobhad Nomads and their Mounts
Refer to page 242 of Bestiary 4 to find stats for typical shobhads, and to page 83 of the Bestiary (using the ankylosaurus) for their mounts. A previous article has stats for the sergeant and clan leader.

Using the Oasis in an Aetherial Adventures Campaign
This location can be used in all sorts of adventures, including a few of the following possibilities.

Posted by Nate Christen at 3:19 AM