Third in the series is a sentryship. 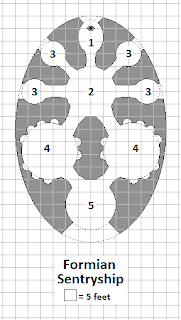 Sentryship
The next large type of stoneship is this one, which measure sixty feet in width and ninety in length. It features the usual fore section (1), including the navigation sphere. Aft of that is a broad open chamber (2), which is home to the myrmarch that this ship carries. From there the myrmarch commands the crew of workers and warriors. Four smaller tunnels lead out to spaces for weapons emplacements (3), two facing forward and two facing out to the sides. Larger passageways lead back to the quarters (4) for the crew. Finally, in the aft section (5) there is room for cargo along with rear-facing weapons emplacements.

Ships' Compliments
Each of these vessels is usually crewed in the following manner.

Posted by Nate Christen at 1:52 AM