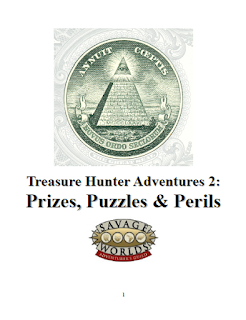 Posted by Nate Christen at 8:10 AM No comments:

Here's another preview of Treasure Hunter Adventures 2: Prizes, Puzzles & Perils; this one presents one of the treasure items detailed in the supplement, the weapon known as Xiuhcoatl. 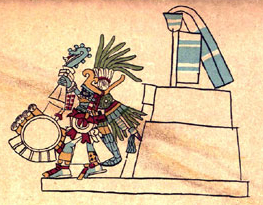 As mentioned above, this item was last wielded by the Aztec Emperor Montezuma. It had been passed down to him from Huitzilopochtli, who had led the Aztecs to their homeland at a place where he saw an eagle alight atop a cactus, with a serpent on the ground beneath it. When Hernan Cortes led the Spanish conquest of Mexico starting in 1519, it was taken as part of the loot sent back to King Charles V, but was lost in a pirate attack.

Xiuhcoatl has the following attributes.

Posted by Nate Christen at 2:38 AM No comments:

Here's a preview of Treasure Hunter Adventures 2: Prizes, Puzzles and Perils. Presented here is one of the four organizations detailed in that supplement, the Office of Strategic Services. 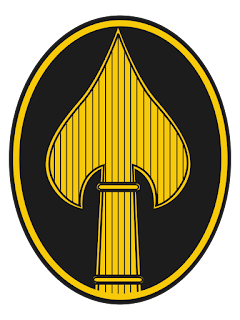 Office of Strategic Services
Established during the build-up to World War II, this group's ostensible purpose was to coordinate intelligence activities for American forces—giving rise to the nickname “Oh So Secret.” Due to the Nazi interest in the occult, however, they soon began studying that subject as well. While their primary mission was to prevent the Nazis from using relics that they'd recovered, by locking them away in a secure facility, some operatives actually tried wielding magic in the war effort. Officially disbanded by order of President Truman in 1945, when it was replaced by the Central Intelligence Agency, the O.S.S. continued to pursue occult investigations. It initially had branches in Europe, North Africa and East Asia, but eventually spread out from there. To this day it is still active, answering only to the President of the United States, in pursuing relics and lore and thus ensuring that they are not used to harm American interests.


Plot Hooks
Here are a few ways the O.S.S. can be used in treasure hunting adventures and campaigns.


Posted by Nate Christen at 3:49 AM No comments:

The Death Mask of Hatshepsut for Savage Worlds RPG

Now available for purchase on DrivethruRPG.com is the first full scenario for use with Treasure Hunter Adventures and the Savage Worlds RPG.


The Death Mask of Hatshepsut 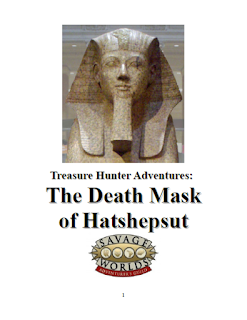 Posted by Nate Christen at 4:57 AM No comments:

Here's a preview of the first full scenario for Treasure Hunter Adventures using the Savage Worlds RPG; it is called The Death Mask of Hatshepsut. 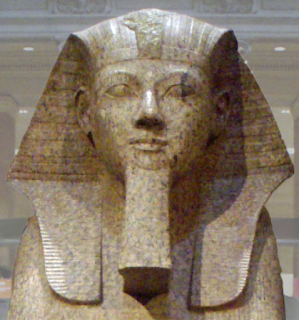 The Legend
According to tales, a British Egyptologist by the name of Douglass Murray was approached in Cairo by an American adventurer who was looking to sell some artifacts recently recovered from a tomb. One of these was the death mask of the Queen Hatshepsut, a pharaoh of the Eighteenth Dynasty who some thought might have had divine blood. Although Murray decided to purchase the mask, the American never profited from the sale—he died only three days later. Shortly after that, before returning to Britain, Murray lost his hand when the rifle that he was firing exploded. The wound turned gangrenous and as a result he had to have his arm amputated at the elbow.

Murray’s fortunes improved little even after returning home. Upon arrival he was informed that two of his servants and two other close associates had died abruptly and from mysterious causes. Beginning to fear that the mask might have been the cause of these incidents, he decided to leave the item at the residence of his girlfriend. She had taken an interest in the relic, but soon regretted it—she began to suffer from a wasting disease that nearly killed her. By then Murray simply wanted the mask out of his life, and arranged a trade with an American museum for some Montana dinosaur bones. The mask was packed up and shipped off to the United States, sailing aboard the RMS Titanic. According to all accounts,when that vessel struck an iceberg and sank it was lost forever...

Recently an aspiring treasure hunter found what he believes is a clue to the mask's location, and he's recruiting others to help him find it.

Posted by Nate Christen at 10:27 AM No comments:

Now available via Drivethrurpg.com are five iconic heroes, ready to print and play, designed for use with Treasure Hunter Adventures and the Savage Worlds RPG. 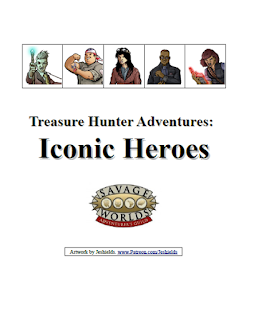 Posted by Nate Christen at 6:33 AM No comments:

Here's a preview of five characters ready for use with the Treasure Hunter Adventures supplement and the Savage Worlds RPG.

Posted by Nate Christen at 5:19 AM No comments: