I'm not good about taking pictures. Happily, somebody who works for MisCon (in Missoula, Montana) is better at it than I. This is taken of my Sunday morning/afternoon round, a scenario called "No Honor Among Thieves." I had eight players sign up for five slots, so my brother Nick acted as shotgun GM, we doubled up a couple of characters and went ahead with a big party.

The Ship of the Dead, by the way, is Nick's work. 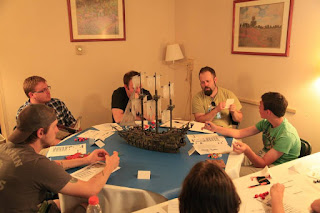 Posted by Nate Christen at 8:29 PM No comments:

After some technology-related delay, here are a few more area descriptions for the asteroid colony known as Crossroads.

7. Typical Homes
A typical home in the Crossroads colony is a simple affair. It has a common room (A) which is furnished with a table and chairs, along with a hearth for heating water and cooking meals. There is usually one larger bedroom (B) for the parents, along with smaller ones (C) for the children. All have beds, of course, but the larger bedroom boasts a wardrobe, while the smaller ones might have storage trunks. Finally, there is often a storage room (D) that can be used for other purposes as needed.

8. The Obelisk
The center of life in the colony, albeit one that might easily be overlooked, is the elemental obelisk that provides warmth, breathable atmosphere and gravity to the asteroid city. This one stands in the middle of the grove, surrounded by a fence for protection—but nobody in one's right mind would try to damage this important structure. Right?

9. The Grove
As life continues to develop on this island in the void, this grove is a notable development. In addition to more common deciduous and coniferous trees, there are also some that bear fruit. It is all part of the druid Maelyrra's plan to turn this into a self-sufficient colony with its own recurring flora.

Born and raised in the embrace of the sea, the elf druid Maelyrra considered herself a protector of the waters and the plants and animals that inhabit it. To that end she spent most of her time in the form of an orca, traveling with her dolphin companion and bringing comfort to animals in need. She considers violence to be abhorrent, except for that which is required to survive per the natural order of the world. Her life changed drastically, however, when she found the corpse of an oma floating dead in the water, killed by an orc whaling crew. When another oma—the mate of the deceased—appeared in the air, seeking it, she realized that her mission had taken on a much broader scope. Eventually her travels led her to Crossroads, where she works to create a livable biosphere while also looking out for the orcs that killed the oma.

Posted by Nate Christen at 5:27 PM No comments:

Not All That Glitters Is Golden

Here's another Dropbox link for a Pirates of the Spanish Main adventure. It continues the series introduced in "All's Fair in Love and War" and "To the Victor Go the Spoils."

Not All That Glitters Is Golden

Posted by Nate Christen at 8:01 AM No comments: