This post is a quick one, but, I think, a useful one. In my reading, I've encountered references to different watches aboard a ship. After a little research, I've summarized the system of timekeeping for ships so that it can be used in nautically themed campaigns. 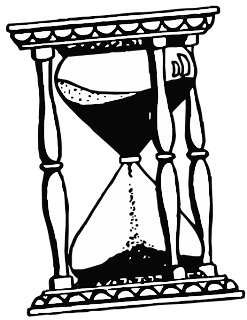 Watches
It's a tried-and-true element of Dungeons & Dragons adventures: setting watches while the party is resting. In a Skull & Bones game, however, it's more than just good practice; it's the long-established custom of the sea. Using this system can help to provide a sense of realism in a campaign, and it also divides time at sea nicely into six segments for the purpose of determining encounters. (Note that the following time references use the twenty-four clock.)

The dog watch is divided into two separate segments of two hours each, the first and last dog watches. In this way, the time periods in which different groups are on watch vary from day to day. Depending on the size of a ship's crew, there could be two groups or three. Naturally, having three watch groups means more time to rest for everyone involved.

In this way, the ship's traditional organizational scheme also provides the GM with a natural arrangment for determining random encounters. For example, there might be a 1-in-6 chance of an encounter during any watch, and so the GM rolls 1d6, with something happening for each result of a 1. Should an encounter be indicated during the dog watch, there's a 50% chance of it being during the first or last part of it, respectively. As always, the PC's should decide who is awake for each watch. Additionally, if the GM is using the system for tracking crew members as detailed in the article "A Motley Crew," specific NPC's could also be assigned to serve with the PC's.

Time is kept with a thirty-minute glass; therefore, every watch consists of eight glasses. Since the ship's bell is rung after each such half hour, time can be noted as the Nth bell during a given watch. For example, half an hour before midnight is the seventh bell of the first watch.
Posted by Nate Christen at 5:38 PM No comments:

In honor of International Talk Like a Pirate Day, I'm posting this puzzle that can be used in pirate-themed games.

Treasure maps are a ubiquitous element in pirate adventures, harkening back to the mysterious chart carried by Billy Bones in Treasure Island. In a Skull & Bones campaign, however, it can be difficult coming up with new ways to encode secret messages so as to keep things fresh and challenging for the players. To that end, presented here is another idea for such a puzzle.
At some point, the PC's receive a cryptic verbal message along with a note that consists of compass points. The message is that "The Rose holds the key." The note contains the following.

A DC 12 Knowledge (local) or Gather Information check reveals that Rose could refer to Lady Rose, the lover of a renowned pirate; DC 18 checks, or asking around town, reveals that she is buried beneath St. Paul's Church in Port Royal. At that point, a clandestine visit to said holy place can reveal a secret door in the back of her burial location, one that opens onto a tunnel leading to a small circular chamber. The walls of that room are lined with letters, as depicted on the map. 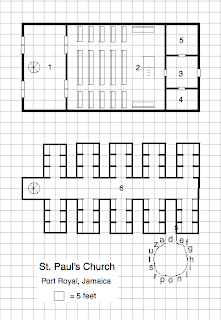 It shouldn't take a skill check to recognize that the directions on the note refer to compass points, and thus to letters in the chamber. In this way, the note can be translated as follows.

"The rose points to the prize
under the gaze of Pelee."

That, in turn, is a reference to Rose Point on the island of Martinique, something characters can recognize with a DC 12 Knowledge (navigation) or a DC 18 Knowledge (local) check. Refer to the map of Martinique on page 169 of the Skull & Bones rulebook. Of course, what awaits the PC's there is for the GM to determine.
Posted by Nate Christen at 7:53 PM No comments:

Sometimes, throughout the course of an adventure, characters find themselves without a decent supply of food or water. Since the average human being can only survive for about three weeks without the prior, and for about three days without the latter, this can present a whole new kind of danger unlike that presented by gunfights, brawls or natural hazards.

The following rules are intended to better reflect the amount of supplies that characters may need to carry aboard ship for long voyages. 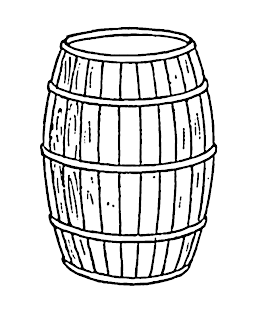 How Much Water and Food Does a Character Need?

The amount of water that a character must consume to remain healthy depends largely upon two factors--one's level of activity and the average temperature. Increases in either of these factors means that she must drink more water to stay healthy. The amount of food that a character needs works a little bit differently. While this amount increases with a character’s level of activity, it also increases when the air temperature is colder.

Amount of Water Needed, in Pints

Amount of Food Needed, in Pounds

Should a character be forced to make do with an inadequate supply of food or water, she begins to suffer damage as detailed in the Core Rulebook. Note also that, should a character be suffering from a lack of food while also trying to resist damage from cold weather, he suffers a –2 circumstance penalty to the Fortitude save made to resist that damage.

Using These Rules in a Skull & Bones Campaign
The threat of death via dehydration or starvation can arise in a number of different situations during a quasi-historical, pirate-themed campaign; a few of the possibilities are detailed here.

A voyage by ship is probably the best example. This is especially the case if a vessel is caught in the doldrums, unable to make progress while supplies are slowly dwindling. The situation could also arise while traveling in a remote and barren wilderness environment, where sources of freshwater and foodstuffs simply cannot be found. Finally, a pirate vessel in enemy territory, where attempts to land parties for refilling water casks, foraging or hunting might receive a hostile reception, could also present such a difficulty. Of course, these situations also provide a good opportunity for characters to use their skills and abilities outside of combat.

In these instances, it becomes necessary for the players and GM to keep track of the food supply that a vessel is carrying. This works much like determining how much cargo it's carrying, except that the total is reduced every day based on the number of crew members multiplied by the amount of food needed. Once the supply runs short, refer to the Dungeon Master's Guide to find rules for how this affects characters. Additionally, running on short rations--anything less than the necessary amount--has a cumulative negative effect. For example, every two days subsisting on half rations count as one day of going without food.

Such hardships also present opportunities for heroic action, however. For one thing, characters can make Survival checks to gather food for themselves or others, as detailed in the core rulebook. At the GM's discretion, there could also be some encounters with potential food sources such as wild animals. This could also create a need for some good interaction or roleplaying, such as visiting a previously unknown native tribe or even the settlement of an enemy nation while seeking sustenance. Finally, crew members who take exception to the decisions of the vessel's leadership could also begin causing trouble.

Posted by Nate Christen at 4:29 PM No comments: