The Rest of the Galaxy 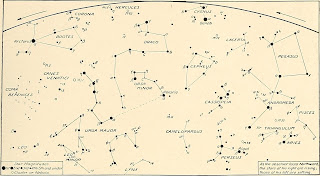 Inside the Sol System, the locations of the known bodies—Wodan, Freya, Homeworld, Tyr, the Asteroid Belt, Thunar and Kronos—can be represented by their relative positions on a single plane. When it comes to the planets that orbit other stars, however, the system of location becomes more complicated. Given that they were the first to explore beyond Homeworld's system, it was the elves who devised a means of finding one's heading for interstellar voyages.

For this they use the eighty-eight commonly recognized constellations, names given to groups of stars based on what people thought they resembled. They also assigned letters to the stars that comprised them, such as alpha, beta, gamma, etc. For example, the North Star, otherwise known as Polaris, is alpha in the constellation ursa major, the Great Bear. Taking a heading on it means that a vessel is traveling straight upward from the plane in which this system's planets orbit Sol.
More information about the creatures that inhabit these worlds can be found in another article, Planetary Ecologies:

Sylvanus
This world orbits the triple stars Alpha, Beta and Proxima Centauri, some 4.25 lightyears from the Sol System. It was the first planet beyond the Sol System to be visited by an elf arkship, and the crew of that vessel was astounded to find it filled with plant and animal life. Sylvanus is almost a perfect natural paradise, with few intelligent inhabitants except for the arborlings, creatures similar to treants who act as caretakers. For this reason the elves have kept the location of Sylvanus a closely guarded secret, hoping to preserve its pristine environment.

More information about arborlings can be found in a supplement from Clockwork Gnome Publishing.

Wyrdworld
Orbiting a single red dwarf star, this world lies six lightyears from the Sol System in the direction of Ophichus. It his home to two main intelligent species, the shobhad and the kasatha. The prior live in nomadic bands that survive by hunting fearsome wild creatures, while the latter form small enclaves and are known to trade with visitors. This world was discovered by an elf arkship, but has been further explored by an agent of the Royal Interplanetary Company, Captain Eli Barnard, who trades imported goods for the shobhad's two most famous inventions—black powder and firearms.

Details of a kasatha caravanserai can be found in a previous article.

Interstellar Space
While it might seem unusual to include this region—it is, after all, a vast nothing—it's important to note that the open void is sometimes home to the greatest dangers that spacefarers can encounter. These include the oma, which is sometimes used for transporting passengers; the enigmatic entity known as a sentient nebula; and the massive astral leviathan. There have also been reported sightings of dragons, ones different from the kinds that once lived on Homeworld. Finally, although explorers have not heretofore encountered travelers from other star systems in craft of their own, most believe that it's only a matter of time before they do.

The Black Hole
Although the elves and their arkships have made numerous discoveries on their interstellar missions, at least one ended in tragedy. That crew had set out to visit a body shaped like a star, but utterly black. It was located next to a star from which it continually drained light, heat and material. Lurking in that volatile area was something that attacked the crew, corrupting the elves along with the animals that they were transporting. Some of them turned murderous, and eventually only a handful of survivors escaped aboard the arkship's longboat. After passing back through the interstellar portal, they used magic to seal it against pursuit.

More information about elf arkships and their missions can be found in a couple of previous articles.

Other Stars and Planets
At this time, elven exploration beyond the Sol System is still in its early stages; having made contact with the inhabitants of two worlds. They have other expeditions underway, however; these are left up to the GM to develop further. For inspiration, Wikipedia has a good list of other stars with orbiting planets not so far from Homeworld's sun.

Posted by Nate Christen at 3:37 AM