Spinning off of yesterday's article about storyline implications, here's a writeup for a native outpost on a far-flung, "weird" world.

Kasatha Caravanserai
This structure stands in the middle of a broad desert, an area traversed by numerous shobadh caravans as they go about their business. Additionally, the structure includes numerous pools of water in separated areas, laid out so that visiting aetherships can also land their cargo and passengers. 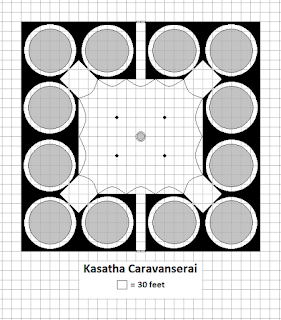 Each of the circular areas is a landing pit, one that is filled with water so that aetherships and boats have a place to land. These are square areas closed off by thirty-foot-high walls made of stone. In the middle of each is a pool of water some twenty feet deep and more than a hundred feet in diameter. These pools provide a place for aetherships to land, as well as a source of water for visiting shobadh caravan drives to water their reptiloid mounts. 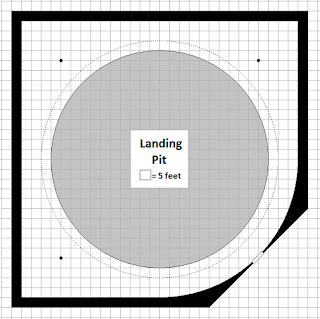 In the center of the caravanserai is a broad, open marketplace covered by a cloth canopy, known as the Suq. There, crews from the visiting aetherships lay out their goods for sale, as do shobhad nomads with their visiting reptiloid caravans. Additionally, various entertainers of a more or less family-friendly nature put on distracting displays, inviting spectators to pay hard-earned coins for such diversions. In the middle of it all is an open well, the source of water for the entire caravanserai.


Adventure Hooks for the Kasatha Caravanserai
There are many ways in which this desert watering hole can be worked into space fantasy adventures and campaigns; just a few of the possibilities are listed here.

Posted by Nate Christen at 3:04 AM