Presented below are some of my impressions and ideas from reading again the comic books from the series The Sixth Gun and Shadow Roads, with an emphasis on using their stories to inspire Savage Worlds RPG adventures and campaigns. 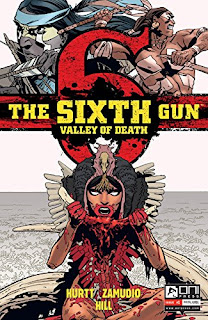 These three issues were originally published from June to August in 2015. Here are my impressions:

Posted by Nate Christen at 7:23 PM