This supplement updates the asteroid colony known as Crossroads to show how it has grown and changed following the events depicted in the Godsharp Saga adventures. For more information about those happenings, refer to the following article. 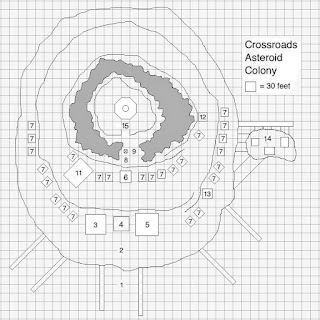 Refer to the map above for the relative positions of the following locations. 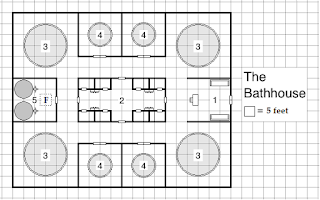 11. Bathhouse
Refer to the map above for a layout of the bathhouse. The bathhouse has a reception area with a desk (1) in front, and private stalls for changing (2) in the middle. Around them are located four large common pools (3) along with four smaller, private ones (4). In the rear is a room with storage tanks (5), one hot and one cold, and pipes and valves for distributing the water.

Axelrod is a friendly, happy-go-lucky, brave (some would say foolish) and inventive gnome. Having given up the life of an aethership captain, he converted to the worship of Gaea, the Earth Mother; his current scheme is running a bathhouse on the Crossroads asteroid colony—an undertaking that has proven more challenging than he imagined.

12. Constabulary
As the settlement is expanding, there's been a call for more law and order; Lieutenant Corenelius Vandemere, a cavalier of the Order of the Lion, has stepped up to provide it. Along with a couple of sergeants and half a dozen ordinary constables, they keep the peace in town. The constabulary has a front room (A) with tables and chairs for visitors, along with a desk for Vandemere himself. His sergeants have their own desks in a side room (B), and a short hallway provides access to three holding cells (C).

Lieutenant Vandemere: Refer to the Crossroads supplement for stats.

Constables: Same as above. 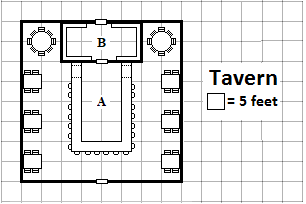 13. Tavern
As an alternative to the Sign of the Ourobouros, which also provides lodging and food, an enterprising former captain named Michalis opened this establishment that only sells drinks. It caters to more of a rough-and-tumble crowd than its rival, and the customers at both places seem to like it that way. This tavern consists of little more than a big, open bar area (A) with stools for twenty and tables for as many more, and a small back room (B) in which the potables are stored.
What most of the locals don't know is that this is part of an effort by the Freebooters' Fellowship to infiltrate the settlement.


The captain epitomizes the very nature of a pirate, as befits one who leads such a band of scallywags. 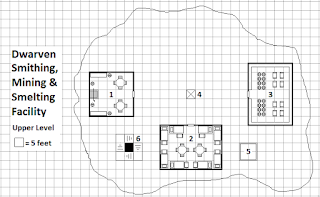 14. Smithy
Jorunn's facility boasts a mess hall (1), barracks (2) that can sleep eight, small warehouse (3), and its own elemental obelisk. There's also a cargo lift (5) along with stairs for accessing the lower level. Inside the asteroid there is a broad open space (7) with mine carts for moving material, along with smithing stations (8) and a crucible for smelting (9). 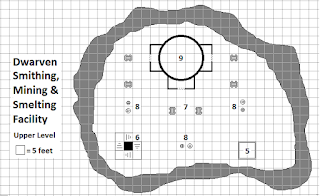 Some of the locals, seeing the success of Jorunn's operation, have started to discuss the possibility of connecting other asteroid to Crossroads, thereby creating a string of interconnected rocks.

Jorunn is a dwarf who commands a mobile smithy. Instead of plying the drifting rocks of the Asteroid Belt, however, she has decided to set up shop as part of the Crossroads colony, where she crafts armor, weapons, and even mundane metal goods for sale to the locals. 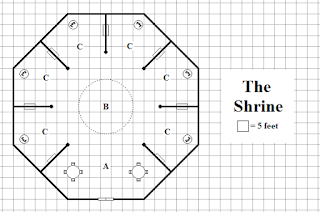 15. Shrine
This building is open for all visitors to practice their religious devotions. For this reason, it has an open seating area (A) in front, with a domed central area (B) surrounded by alcoves devoted to different deities (C). Currently there are shrines to Ptah, Sol, Luna, and Gaea; one is used for general meditation, and the last is empty. All are welcome to practice their devotions here, provided that doing so causes no harm to others. For that reason, worshipers of Lamashtu and the Void do not frequent the place—but rumor has it that there are secret meetings of those faithful in the tunnels beneath the settlement. 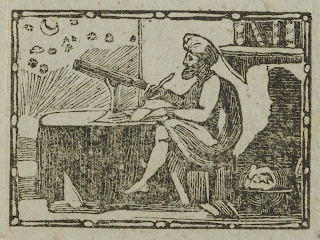 Posted by Nate Christen at 8:22 AM