While some kasatha leave their clans to go in search of adventure, others find a sense of purpose in serving their goddess, honing their bodies, minds and spirits in order to be her agents in the world. Those who follow that path often gather in buildings dedicated to that purpose. 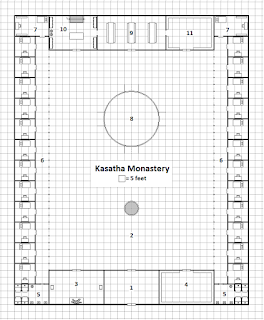 The Monastery
Refer to the map above for the following location descriptions.

1. Entrance
Entry to the monastery comes via a broad chamber that is sealed with iron-bound wooden doors on both sides (hardness 5 and 20 hit points; DC 25 to break), providing a first line of defense should the monastery ever be attacked.

2. Courtyard
This area, open to the sky above, has two notable features. First is the monastery's well, which is almost ten feet in width and a hundred feet deep. That, of course, is the life's blood of the structure; the monks spend considerable time every day dropping buckets on ropes to haul up water. The other feature, the sparring platform, is described below.

3. Shrine
Dedicated to the Mother Goddess of the Kasatha, this room contains a statue of her, along with numerous small cushions for those who wish to meditate here.

4. Armory
The walls of this room are lined with shelves containing all manner of weapons. These include many variations of the ones allowed for monks on page 57 of the Core Rulebook. What is more, the monks use the open space in the middle of this room for training on those rare occasions when weather does not allow them to practice on the sparring platform.

5. Washrooms
Both of these areas—one for the males and one for the females—includes privies and washbasins for the monks to take care of their bodily needs and maintain cleanliness.

6. Monks' Cells
Each of these rooms is furnished with a small, functional bed along with a table and chair for reading, writing and other activities. Doorways to the rooms are covered by curtains, and open onto covered walkways that run along the sides of the courtyard.

7. Superior's Quarters
In addition to the furniture provided for other monks, each of these rooms boasts bookshelves filled with scrolls, tablets and codices—the collected writings of previous order members. Those are, of course, passed down from each Superior Master to the next. Note that, while there are male and female Superior Masters at any given time, the female holds authority when necessary.

8. Sparring Platform
This platform, made from a wood frame filled with earth, is where the monks do most of their training. It stands three feet above the surrounding ground, and four short sets of stairs lead up to it.

9. Refectory
Three long tables, flanked by benches, fill this room; it is where the monks take their meals.

10. Kitchen
Cupboards line the walls of this room; it is also furnished with a broad table for food preparation, along with barrels of water and fuel. Most notable, however, is the hearth against the outside wall that is used for cooking along with warming braziers for heating the monks' cells during the cold winter months.

11. Storage
The shelves that line the walls of this room are stocked with all manner of foodstuffs, filling jars, boxes, sacks, baskets and crates, as well as hanging from hooks attached to the ceiling.

The Monks
To find stats for a Novice (1st-level) monk, refer to page 174 of Bestiary 4. For immaculate (5th-level) and Superior Master (7th-level) monks, refer to a previous article.

https://d20pirates.blogspot.com/2017/03/caravanserai-inhabitants.html
That article also details a location that characters would likely visit during a voyage to the kasathas' homeworld.


Using the Monastery in an Aetherial Adventures Campaign
This location can be used in all sorts of adventures, including a few of the following possibilities.

Posted by Nate Christen at 8:52 AM