I've been tinkering with ideas for this prestige class for a while; here goes. 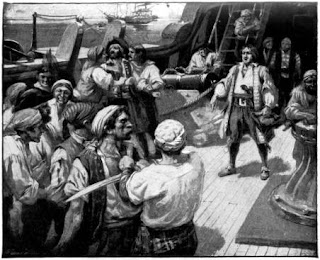 Ship Captain (Prestige Class)
While almost anyone can give orders and thus direct the activity aboard a ship, only a select few develop a closer bond with the vessel and those who serve aboard it. Those are the truly memorable captains—revered by their crews, feared by their enemies, and remembered (for better or for worse) in the annals of history.

This prestige class attracts those characters who have a true love for sailing vessels, and who wish to make their names by commanding a ship and crew in some type of business—be it combat, exploration, trade, or something else.

Role: The captain is a leader at all times aboard her chosen vessel. Although other characters play their particular roles, especially when the crew goes ashore, she is the one to whom they all turn when combat or other hazards make sailing difficult.
Alignment: Any.
Hit Die: d10.

Requirements
To qualify to become a ship captain, a character must fulfill all the following criteria.
Skills: Profession (sailor) 5 ranks.
Special: The character must own (by oneself or jointly with willing partners) some manner of sailing ship. 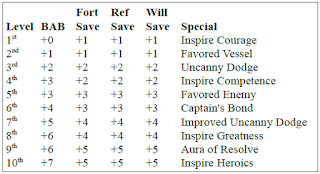 Class Features
All of the following are class features of the ship captain prestige class.
Weapon and Armor Proficiency: A ship captain is proficient with all simple and martial weapons, and with siege weapons.
Inspire Courage (Su): A ship's captain can rally her sailors, granting them a +1 bonus to saves against fear and charm effects, along with a +1 bonus to attack rolls and weapon damage rolls. This bonus increases to +2 at 5th level, and to +3 at 9th level.
Favored Vessel (Ex): The captain becomes accustomed to, and even comfortable on, the heaving deck of a ship, granting a +2 bonus on initiative checks, along with Craft (carpentry), Diplomacy, Intimidate, Perception and Profession (sailor) checks made while on her chosen vessel.
Evasion (Ex): As the captain's reputation begins to spread, she develops a seemingly preternatural ability to escape from certain types of attacks. Against those that cause only half damage on a successful Reflex save, she instead takes no damage. Should she be helpless, however, she suffers full damage.
Inspire Competence (Su): A ship's captain can grant a +2 competence bonus to skill checks made by crew members under her command. This increases to a +3 bonus at 8th level.
Favored Enemy (Ex): From her experience working toward some kind of objective, the captain gains a favored enemy in the same manner as a ranger; refer to page 64 of the core rulebook for details.
Captain's Bond (Type): A ship's captain comes to rely on certain crew members—usually, other members of the adventuring party—when difficulties arise. This ability functions in the same manner as a ranger's bond with his companions, as detailed on page 66 of the core rulebook.
Improved Evasion (Ex): Just as with evasion, the captain suffers no damage from attacks that allow a saving throw for half damage; now, however, she only suffers half damage on a failed saving throw.
Inspire Greatness (Su): The captain can grant one ally (and two at 10th level) temporary hit points and other bonuses, in the same manner as a bard; refer to pages 37-8 in the core rulebook for details.
Aura of Resolve (Su): Such is the nature of the captain's tenacity that she gains immunity to charm spells and spell-like abilities, and she grants a +4 bonus to her crew members' saving throws and other checks against similar effects.
Inspire Heroics (Su): This ability functions in the same manner as the bard ability of the same name; refer to page 38 in the core rulebook for details.

Posted by Nate Christen at 4:50 PM