Presented here is a map for a train, including cars for a variety of purposes, along with descriptions of each location as well as stats for some of the characters who can be found aboard it. 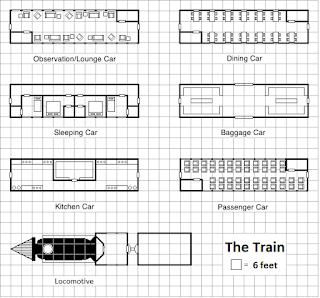 Locomotive
The engine that draws the train relies on a big steam apparatus, fueled with wood, that drives its wheels and thus pulls the rest of the cars. It is operated from a small cabin filled with pressure gauges, levers and suchlike. A narrow platform leads along each side of the boiler, and a broad iron cow catcher extends outward from the front. Behind the locomotive is towed a tender filled with cut and split logs.

Passenger Car
This car is furnished with rows of seats for frugal passengers; it has a water closet at each end, and windows look out at the passing terrain.

Kitchen Car
Wood-fueled stoves, along with narrow counters, provide space for cooking food; there's also a well-stocked larder. All of the expected implements can be found here, too, including dishes, serving utensils and the like.

Baggage Car
Shelves line the walls of this car, with spaces for storing all manner of luggage and cargo. For that reason, this car is generally kept locked, and only a few members have copies of the key.

Sleeping Car
Those passengers who can afford such luxuries are assigned to these cars, having rooms with single or double beds and small water closets of their own. A narrow passage runs alongside, with doors letting into the various compartments.

Dining Car
On longer journeys, those passengers who've secured space in the sleeping cars can take their meals here. The car is furnished with numerous tables, along with chairs, tablecloths, and other such niceties. Stewards serve the meals that are prepared in the kitchen car.

Lounge Car
For shorter trips, those who wish to travel in greater comfort can ride here, where there are comfortable chairs instead of seats, along with side tables for the food and drinks that are served.

Crew, Passengers and Plots
Here are stat blocks and descriptions for the train's crew members and passengers.

Buffalo Hunters
Hezekiah Brown and his sons, Jeremiah and Jebediah, are employed by the railroad to kill buffalo. It's that simple. They enjoy the task, and are even paid for it. This is, of course, because the people who've invested in the railroad believe that, if the buffalo are gone, then the Indians will follow them. While the job is not difficult, these men have started to believe themselves to be great and mighty hunters, veritable trailblazers of the West.
Attributes: Agility d8, Smarts d6, Spirit d4, Strength d6, Vigor d6
Skills: Fighting d4, Notice d6, Shooting d8, Survival d6, Tracking d6
Charisma: --, Pace: 6”, Parry: 4, Toughness: 5
Edges: Marksman, No Mercy
Hindrances: Mean
Gear: Clothing, loaded backpacks, Sharps Big 50 (Range 24/48/96, Damage 2d10, RoF 1).

The Writer
Roy Williams is a writer from back east, a city slicker who's come to love tales of adventure and drama set in the Wild West. For that reason he has set out on a tour, hoping to hear more stories and record them—with suitable embellishments, of course—as part of his own future works. What he may lack in physical constitution, he makes up for with a keen mind and a noble spirit. He can become a fan of the heroes, following them from place to place and asking them to tell of their exploits.
Attributes: Agility d6, Smarts d8, Spirit d6, Strength d6, Vigor d4
Skills: Investigation d8, Knowledge d8, Notice d8, Streetwise d8
Charisma: --, Pace: 6”, Parry: 2, Toughness: 4
Edges: Investigator
Hindrances: Curious
Gear: Fancy clothing, books, writing materials

Life aboard the Train
There's all manner of events that can happen aboard the train; detailed here are just a few of the possibilities.

Posted by Nate Christen at 6:28 PM