This post addresses the first story arc of the main comic series for The Sixth Gun. 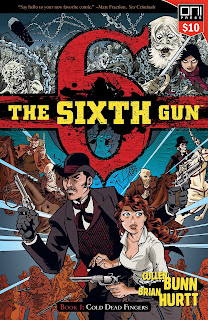 These six issues were originally published from May to November of 2010. Issue 1 was first released for Free Comic Book Day that year, and then reissued to launch the series in July. Here are my impressions:

Posted by Nate Christen at 7:32 PM