Here's a novel that can provide inspiration for adventures and campaigns set in the world of The Sixth Gun and Shadow Roads; it is Territory by Emma Bull. 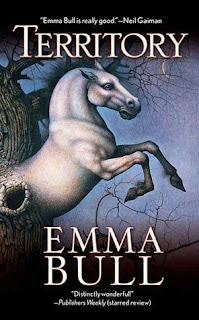 I I first read this novel back around 2010, after a trip to the Grand Canyon, when I was starting to take an interest in supernatural westerns. Coincidentally, that was also when Oni Press released Issue #1 of The Sixth Gun for Free Comic Book Day. Here are a few of the impressions that it left on me after this second reading.

Posted by Nate Christen at 3:07 PM