Perils of the Winding Way

This post presents more locations, encounters and plot elements involving the Winding Way, for use in adventures and campaigns using The Sixth Gun RPG.


Perils of the Winding Way PDF 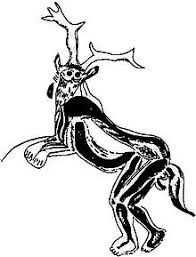 The Spirit Realm
Detailed below are a number of locations—along with their inhabitants and connections to this growing conflict—that characters might encounter as they travel the Winding Way. 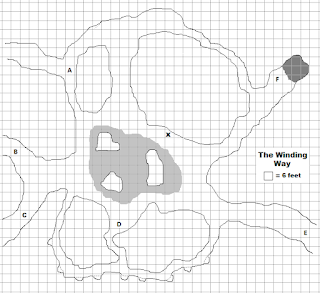 In the Middle of Things: The Grotto
At the heart of this part of the Winding Way is a section that has come to be known as the Grotto. It is an intersection of numerous tunnels, and one that has come to be inhabited by some of the unusual beings who populate this realm.

Refer to the map above for the following location descriptions. Tunnel A comes in from the New Globe Theater, which the PCs might have visited if they participated in the events of the scenario “Smoke and Mirrors.” Tunnels B and C lead off to a vision of the past as well as a glimpse at a possible future, both of which are detailed below.

At the heart of the grotto is a pool of water that has three thick stone pillars rising up from it. This area is home to a small family of skinwalkers, ones who have not fully succumbed to their animal instincts and thus lost touch with their human selves. A narrow passage leads back to the niches in which they sleep (D). On one wall of the larger cavern is painted an image known as “The Sorcerer” (depicted on the cover), which is marked with an X on the map. From there another tunnel (E) leads, among other places, to Fort Arneson.

Skinwalkers (9): Refer to page 79 of The Sixth Gun RPG for stats.

What could be of particular interest is a tunnel that ends abruptly in a small pool of very hot, sulfurous water. This is a connection to the Spirit Realm; by throwing into it an item that was valued by someone who is deceased, the visitor can call up that person's spirit. For that reason the bottom of the pool—which is boiling, inflicting 2d6 damage per round on anyone who reaches into it—contains all manner of items given to conjure ghosts. There is also, of course, the possibility that one or more of the PCs decides to conjure up the spirit of a lost love one, something that is left to the GM to adjudicate. 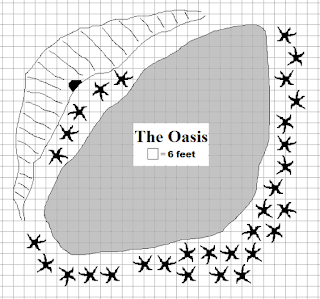 A Glimpse into the Past: Oasis and Battle Site
Here the long tunnel of the Winding Way opens into a cave entrance in the side of a long, low hillside; in front of it lies a small pool surrounded by palm trees, with sand dunes stretching as far as the eye can see in every other direction. After a moment the grisly truth of what has happened here asserts itself. Dead bodies litter the sands, ones that are clearly part of two different armies. Some are dressed in the robes and head cloths of desert nomads, while others wear the chainmail armor and helmets of northern crusaders. Swords, both curved and straight, are strewn about; a Battle check reveals that the nomads seem to have died defending this location. Before they can do much exploring, however, the PCs must deal with the pack of ghouls that is picking over what little remains of the corpses.

Discoveries
Among the bodies a few items the PCs can recover that shed a bit of light on this piece of history. In addition to the tabards marked with the crusader cross, some of the soldiers carry banners emblazoned with six strange symbols (see below). A few of the nomads carry triangular banners bearing the words ibn Ibrahim, written in Arabic.

At the GM's discretion, there could be other items of value, including magical relics. 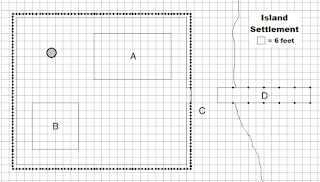 Another Realm of Possibility: The Island
Another branch eventually descends and becomes filled with water; at that point a Notice check also reveals some kind of rumbling sound. Approaching reveals this to be the sound of water, and pushing through it lets the PCs pop up in a pond formed by a waterfall on Prospero's island. While it at first seems no different from previous visits, it is changed—in fact, this is an alternate reality in which the PCs decided to use Prospero's magic to gain control of the local fey creatures. 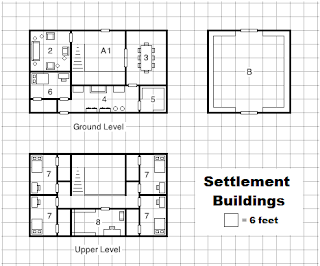 The biggest physical difference in this reality is the establishment of a fort down by the island's natural harbor; refer to the maps above for the following location descriptions. There's a rough but comfortable house (A), built from local wood and having two stories. On the main floor there is a front room (1) flanked by a parlor (2) and dining room (3), along with a kitchen (4), pantry (5) and servant's quarters (6). The upper floor boasts various bedrooms (7) along with a study (9). Here is where the PCs dwell in this reality, and so the GM is encouraged to add more details based on their individual characters.

Lords and Ladies of the Island: Use the stats for the PCs themselves.

Fey Creatures: Refer to the supplement of that name for stats.

The New Way of Things
In addition to the fortified compound, the GM can introduce the following elements depending on how the PCs go about exploring this area.

More of the Story
As the PCs are exploring these parts of the Winding Way, their guides—be that one of the skinwalkers, Small Raven, or even Gareth Hildebrand—can provide some additional insight, including the following details.

The Here and Now: Fort Arneson
On the other end of all these places, times and possibilities lies Fort Arneson, what once was a US Army frontier fort, but has since been commandeered to serve as a regional headquarters for the Black Stars. This was the site of a terrible battle, part of a plot to open a rift in the Winding Way. The fort now serves as the hub of American efforts to combat the Cabal, under the jurisdiction of judge William S. Whitaker. This location will be detailed more in another supplement.

The Puppet Mistress
If the PCs participated in the events of “Smoke and Mirrors,” during which they helped rescue Sir Kenneth Allen from the Cabal in London, then there is also the matter of him being subjected to the Puppet Power by Isadora Bouchard, a Voodoo practitioner. That is why he now acts as her spy, gathering whatever information he can for later exploitation. Since he is currently unable to communicate with her, for now he just bides his time.

Posted by Nate Christen at 6:21 AM