Presented here are supplemental rules for use with the Savage Worlds RPG in the setting of The Sixth Gun comics (and other supernatural westerns); it includes guidelines for ghost ships. 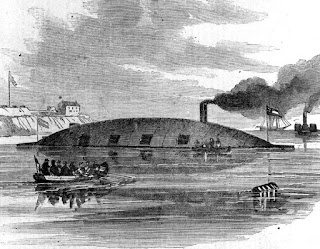 Watercraft
Use the following game stats for these vehicles.

Shipboard Artillery
Use the following stats for weapons that are installed on watercraft. 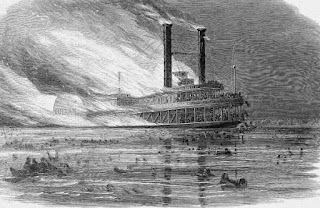 Ghost Ships
Whether it was due to carelessness, greed, or some other factor, the steamboat Sultana set sail from Vicksburg, Mississippi carrying two thousand or more passengers on the night of 24 April 1865. They were Union army soldiers, men who'd just been through the hell of the Civil War and who were eager to sail back upriver to their homes. Such was the crowding that nobody was able to keep an accurate record of exactly who was onboard.

Although the ill-fated voyage managed to last a couple of days, in the early hours of April 27 one of the vessel's four boilers exploded. The resulting hole, it is said, was so large that a smokestack and the wheelhouse fell into it. Fire spread quickly through the remaining hull, forcing passengers to decide between burning to death or drowning in the river. Some managed to float to shore by clinging to debris and even animals, but in all 1,547 people were killed. What is more, the story received little publicity in the press at that time, because it happened on the very same day on which the assassin John Wilkes Booth was capture and killed. Indeed, the official investigation into the matter never resulted in any criminal charges that could bring those responsible for the disaster to justice, and a natural change of course for the river meant that the wreck of the Sultana was eventually buried, and all physical trace of the disaster was lost.

There is still a spiritual trace remaining, however.

Those who ply the waters of the Mississippi River sometimes report seeing a ghostly steamboat, one that moves in an unnatural way and that seems to have an unearthly glow. Skeptics, of course, try to explain away these sightings with notions including tricks of moonlight on the fog and similar ideas. Even so, those who are more attuned to the spiritual realm know that ghosts of the victims, traveling aboard a spectral form of the Sultana still continue their voyage, cursed to haunt the location of their demise, and always looking to bring other helpless victims aboard to share in their fate.

Rules for Ghost Ships and the Sultana