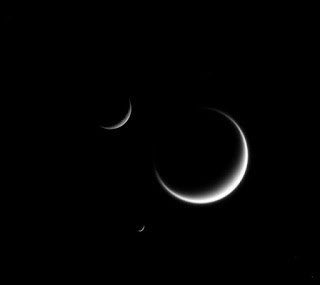 Many Moons
For the inhabitants of Homeworld, the shape of Luna in the night sky is a familiar sight. Indeed, her waxing and waning follow the passing of the months during each year. On other worlds in the Sol System the night sky looks much different, however, as detailed below.

Wodan and Freya
Neither of these planets has a moon of its own; the night sky on the former is just a canopy of stars, while the latter is shrouded in cloud cover so thick that it is not noticeable. Note that the absence of a moon affects the shapechanging of lycanthrope characters, as detailed in the sidebar below.

Homeworld
As mentioned above, Luna has a strange connection to the lycanthropes. It should also be noted that, due to the fact that Luna's period of rotation on its axis is the same as its period of revolution around Homeworld, only one side of the moon is ever visible from that world. That is a fact that could make it an appealing base of operations for those who want to be close to Homeworld, but who want to come and go unobserved.

Tyr
The two moons of this planet are named Phobos and Deimos. Both rocky little planetoids are pockmarked by numerous crater impacts. They are also tidally locked, just like Luna, thus showing only one side to Tyr. Due to its fast revolution around Tyr, some natural philosophers have surmised that Phobos will eventually be torn apart by the forces of gravity.

The Asteroid Belt
While it is commonly believed that this ring or rocky debris was once a planet like the others in the Sol System, it is not known if that world had any moons of its own.

Thunar
This world has four known moons.
Finally, it should be noted that the Elven Navy keeps a ship in orbit around Thunar at all times, although the reason for doing so is not known.

Kronos
Seven moons are known to orbit this world.

Posted by Nate Christen at 9:17 AM