This post presents two more fey creatures, the salamander and the clurichaun, along with plot hooks for using them and a link to a PDF compilation of all six. 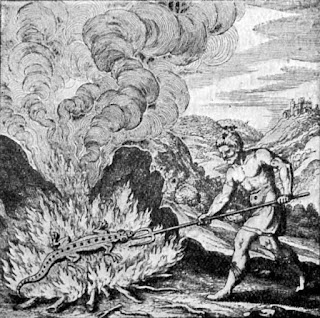 Salamander
This creature resembles a rather small lizard, with colors ranging from yellow, orange and red to black. It is often smudged with soot, given the conditions in which it lives, and puffs of smoke even erupt from its mouth periodically.
Salamanders are creatures of elemental fire, and therefore are closely linked to the practices of alchemy and other types of magic. Their innate abilities make them useful for stoking fires, of course, but it is also believed that certain of their inherent qualities can be harnessed for the brewing of potions and perhaps even the forging of weapons and armor. 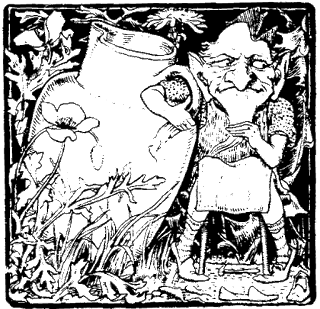 Clurichaun
This creature resembles a small person with an over-sized head, and wearing rustic garb. While it seems almost wizened due to the condition of its skin and hair, the mischievous gleam in its eyes betrays its inner nature.
Clurichauns are spirits that live close to the earth. They are skilled craftspeople and capable of performing astonishing amounts of work when motivated to do so, but would much rather enjoy the comforts of a warm fire, hardy food and strong beer or wine. In fact, their tendency toward heavy drinking is what sometimes leads them to play scary and even dangerous pranks on victims who have somehow earned their ire.

Plot Hooks
These creatures can become involved in adventures and campaigns for any or all of the following reasons.

Posted by Nate Christen at 7:42 AM