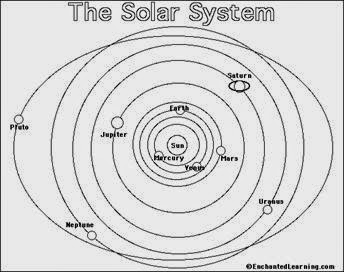 For many homebrew fantasy RPG settings, the GM needs only to create one world. A space fantasy campaign, however, provides the opportunity to create many different ones. When doing so, the GM should keep in mind the following questions.

Heavenly Bodies
In the middle of every solar system is a primary star or stars. One is the most common number, serving as the most notable body in the heavens of the worlds of that system. It can happen, though, that a system is dominated by a binary pair, two suns that revolve around a common axis point. Such an occurrence affects the mythology and everyday language of the world in question. For example, the inhabitants of such planets talk about sunsrise and sunsset, or, more specifically, first sunrise, second sunrise, first sunset and second sunset. In the same way, having two twin sun gods is likely to change the traditional tales on such worlds.

There are two main types of planets. The most familiar to living beings are terrestrial worlds, relatively small and rocky planets that have a solid surface and, with enough of a gravitational pull, to maintain some kind of atmosphere. These, in turn, can have a variety of temperatures. Some are so cold as to be uninhabitable, while others just seem to be locked in a perpetual winter. Others are so hot as to be covered by world-spanning deserts, or even to be burnt-out rocks with no resources other than minerals for space mining. Few are the planets that fall into the sweet spot, those that are ideal for habitation by sentients and that can boast a wide variety of climates. The primary worlds of most campaign settings fall into this category, which means that other planets in their solar systems present other varieties of worlds.

Gas giants, otherwise known as jovian planets, are ones that lack a real surface. They may have a liquid or even a solid core deep in their thick atmospheres, but the air pressure at those levels is such that it can crush most objects. Even so, they sometimes have bands at certain altitudes that are inhabitable, although creating any kind of settlement is a distinct challenge. These bands can be home to a variety of exotic creatures, especially air elementals and other beings who possess the ability to fly without limitation. Additionally, these worlds are most likely to have rings, distinctive bands composed of ice, rocks and dust.

Moons add a lot to a world's mythology. As the bodies that are visible in the night sky, they provide a counterpoint to any notion of a sun god. The fact that they are terrestrial in nature means that they could possibly be inhabited; what is more, the civilizations that develop on them are heavily influenced by the fact that every day the experience earthrise. For most planets, the first extraterrestrial colonization that occurs happens on these satellites.

Asteroid belts usually result from bodies of matter created by the explosion of a primary body, but ones that fail to coalesce into a full-blown world. For the most part, these are little more than rocks drifting through space. Some of them are big enough to develop a spherical structure, and even to capture their own proto-moons. Bodies in the latter category are known as dwarf planets. Keep in mind that many dwarves consider that appellation to be terribly insulting.

The appearance of comets is always a notable event on any planet. These “dirty snowballs” pass through solar systems on wildly elliptical orbits, arriving once during a set number of years. Many planetary cultures consider them to be omens of important events, while those who've ventured into the aether recognize them as sources of valuable raw materials.

Distinctive Features
Having multiple bodies in a solar system gives the GM an opportunity to be creative when designing worlds. For example, one might be shrouded in a sea of ice that is rent by powerful geysers, while another drifts in the midsts of a gas giant's rings—this is known as a shepherd moon—and is pummeled continuously by meteors. A planet's rate of rotation (spinning on its own axis) could equal its rate of revolution (orbiting around its primary star), meaning that one side is eternally cooked by sunlight, while the other is shrouded in perpetual darkness. Each of these provides an opportunity to present new flora and fauna, cultures, plot hooks and other opportunities for adventure.