A previous post listed some of the monster that are appropriate for encounters in the aether; this one provides guidelines for using natural events as hazards. 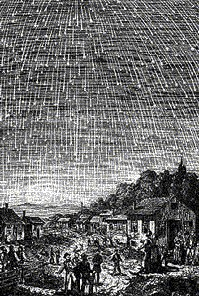 
In addition to the monsters that inhabit the dark void of space, the heavenly bodies themselves can present hazards for travelers.

Solar Winds
This occurs when streams of high energy are emitted from stars. Given the fact that space provides little resistance to them, these streams can then travel great distances. In game terms, solar winds require a DC 20 Profession: pilot check to avoid losing control of the vessel. What is more, characters aboard the vessel must make DC 15 Reflex saves or suffer 1d6 damage and be knocked prone.

Asteroid Belts
Many star systems have these broad orbital stretches filled with floating rocks. They are a favorite place for space monsters to make their lairs, and for intrepid miners to acquire ore. Generally, the rocks that float in a stable orbit are called asteroids, while the ones that float freely are called meteoroids. A rock that enters a planet's atmosphere is called a meteor, and one that reaches the ground is called a meteorite. In game terms, asteroid belts require pilots to make a Profession check, with a DC that varies according to the speed at which the vessel is traveling: 5 for minimal speed (1 square), 10 for half speed or less, 15 for more than half speed and 20 for full speed. Success allows the vessel to pass through that stretch of asteroids, while failure forces a collision, with damaged determined by the size of the asteroid in question.

Nebulae
Certain regions of space are filled with these clouds of dust and gasses; they are a beautiful sight to behold, filled with an impressive array of colors. In game terms, while they do not present any direct threat to aetherships, they do grant concealment during any actions that occur inside them. For that reason, some pirate ships prefer to linger inside nebulae, waiting to pounce upon unsuspecting vessels.

Comets
The phrase “dirty snowball” is an apt way of describing a comet. Consisting of a conglomerate of dust, ice and rock, these bodies drift through solar systems on long, highly elliptical orbits. Indeed, the regular appearance of comets in the skies of worlds are a main impetus for philosophers to speculate about the nature of things beyond the confines of their planets. Comets provide an opportunity to harvest valuable minerals and ice, but present a danger when they approach suns. As they draw close to stars, comets begin to vent trapped gases and debris into space; this is what gives them the appearance of having a tail. In game terms, they should be treated as if suffering the effects of an earthquake spell.
Posted by Nate Christen at 10:47 PM