Presented here is a short article about London and how to use it as the backdrop for Skull & Bones adventures.

London Town
During a Skull & Bones campaign, at one time or another the PC's might need to head back to the Old World, paying a visit to Jolly Old England. When that happens, this article presents some suggestions for presenting that city and incorporating it in the party's adventures. 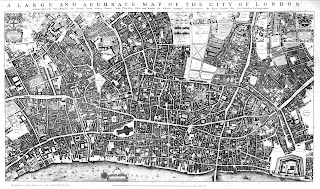 Note that this article owes much of its information to the book 1700: Scenes from London Life, by Maureen Waller. The timeline is based on The Timetables of History by Bernard Grun.

Overview
At first glance, London provides a real change of scenery from the more familiar grounds around the Caribbean. The city sprawls for miles along both sides of the Thames River, home to more than half a million people. Most of the buildings rise to four stories in height or more, crowding along the streets just like the people themselves. A pallor of coal smoke hangs over the city, the unfortunate result of the fuel preferred for heating. Despite these modern developments, however, most of the streets are still packed earth, turning to mud during wet weather. Pigs and chickens often roam loose, with cows venturing to the town towards the edge of it. That, combined with the fact that unmotivated servants might pitch the contents of chamber pots out the window, makes for a sometimes odiferous life.

Places of Interest
A tour of London would not be complete without seeing a number of famous and popular landmarks.
The riverfront is the area that should be most familiar to visiting mariners. After all, this is where ships from all over the world make landfall, bringing in passengers and cargoes just as diverse as the vessels' points of origin. This is where news can also be had, especially in the nearby taverns. Of course, any sailor looking for work would do well to come here, too. The goods that can be found here include tobacco, molasses, sugar and dyes from the West Indies; silk and spices from the Levant; calico and pepper from India; wine and foodstuffs from France and the Mediterranean; tea and porcelain from China; and coal from Newcastle.

Coffeehouses are of increasing importance in this city. It is here that the people gather to exchange news and talk politics; indeed, the growing business of printing newspapers is centered in these establishments. Additionally, different places cater to particular clientele. Members of the Royal Society--including Isaac Newton, Edmund Halley and Hans Sloane--congregate at the Grecian, while the clegy prefer Child's. Adherents of the Whig party favored St. James's, while Tories tended toward the Cocoa Tree. Lawyers were known to frequent Nandos.

London Bridge is one of the most distinctive landmarks, at least for newcomers traveling on the River Thames. Indeed, the pilings that support it create an artificial cataract, presenting a hazard to even the most skilled boatmen. Some travelers prefer to disembark on one side and then board again on the other side, rather than venturing through the rapids. From inside the city, however, it could be possible to cross the bridge without even realizing it, since houses and shops line both sides and the river is only visible in a few places.

Fleet Ditch is a less pleasant sight in town. It is where the effluvia that is washed through the streets by rain eventually collects in a stinking quagmire. What is more, people looking to dispose of dead animals and the like dump them here, adding to the mess.

This is also a time when many of the city's most famous landmarks are being built or rebuilt. In the aftermath of the Great London Fire, Christopher Wren is being given the task of planning and overseeing numerous construction projects, including Saint Paul's Cathedral, the Temple Bar, and the Theater Royal in Drury Lane, along with a monument to the Great Fire.

Food and Drink
London can boast a variety of foods. Common meats include beef or veal, mutton or lamb, pork and fresh or salted fish. People might also supplement with wild game such as venison, rabbit and various kinds of fowl. Vegetables include artichokes, beans, beets, cabbage, carrots, cauliflower, celery, cucumbers, lettuce, peas, potatoes, radishes and spinach and turnips. For fruit Londoners can choose from apples, artichokes, cherries, grapes, peaches, pears and plums. Cheese is an important staple, too, and milk is provided by milkmaids who roam the streets. Indeed, poorer citizens commonly make due with bread, cheese and beer for many a meal.

Most pirates won't be bothered by the fact that Londoners don't usually drink the local water, since it can be hard to find; rather, they consume a good deal of alcohol. Many houses keep at least a firkin of beer (eight gallons) on hand, along with French wine and Dutch gin. Of course, more exotic beverages such as rum can also be found, especially along the waterfront.

Diversions
As mentioned above, coffee houses provide an important means of communication to Londoners. The same can be said for taverns and public houses, although they are supposed to be closed on Sundays. It is at such places, too, that entertainments like bear- and bull-baiting, cockfighting and gambling take place. The locals also enjoy making visits to local theaters, along with excursions to the Bethlem mental hospital, also known as Bedlam, to watch the patients and their doings.

Eight times a year the bells of London's churches are muffled and ring to herald what is possibly the most popular public spectacle: hangings. At these times the people gather to watch as criminals are paraded through the streets to the gallows; pitching rotten vegetables and fruit, and dead cats or dogs if they're available, adds to the humiliation.

Monetary Concerns
Refer to page 51 of the Skull & Bones rulebook to find a table for converting English currency into Spanish and other varieties.

A typical housemaid in London might earn from five to eight pounds a year, while a shopkeeper could bring in forty-five pounds. Merchants, on the other hand, could earn from two hundred to four hundre pounds annually. A typical middle class family could live on fifty pounds a year. Houses along main thoroughfares could rent for fifty to sixty pounds a year, while those along side streets go for twenty to thirty pounds.

Unusual Inhabitants
In addition to the types of characters already mentioned, various unusual inhabitants can also be found in the city. There is a strong French Huguenot minority, for example, made up of people who fled from religious persecution in France. They add to the strongly Protestant tendencies of the population, given that most people commit themselves to the Church of England. Even so, other religious minorities exist. The Puritans are becoming increasingly prominent. On the other hand, English catholics tend to keep a low profile, worshipping in secret.

Slaves find themselves in a curious situation in London. England has not yet prohibited slavery, although it is not practiced in the country and importing new slaves is forbidden. It is still permitted in overseas territories, however, and English ships do plenty of business making runs from Africa to the colonies. Because of this, slaves who come to London sometimes try to establish their freedom, albeit with limited success.

The Society for the Reformation of Manners is an organization of concerned citizens dedicated to eliminating the vices that, in the eyes of its members, plague English society. These include drinking, gambling and whoring, especially on the Sabbath. To that end, they publish a Black Roll containing the names of people who engage in such practices.

According to the Player's Handbook, only characters of the barbarian class do not start playing being literate. In the 1700's literacy was not so common, however; only about fifty percent of women know how to read and write, and many pirates were known to make their marks with an X rather than signing their names. Given this, a GM might choose to have only characters of the cleric, wizard and shantyman classes be literate; others must spend skill ranks to do so.

Timeline
Depending on when a particular campaign is set, the following events and occurences could be taking place.
1666--France and the Netherlands declare war on England; the Great Fire destroys much of London.
1668--England forms the Alliance of the Hague with the Netherlands.
1670--The Hudson's Bay Company is founded.
1671--Sir Henry Morgan becomes deputy governor of Jamaica.
1672--England declares war on the Netherlands; a charter is granted to the Royal African Company.
1675--Sir Christopher Wren begins rebuilding St. Paul's Cathedral.
1680--A penny postal service is established in London.
1683--William Dampier begins his voyage around the world.
1684--Alexander Esquemeling publishes his History of the Buccaneers of America.
1685--Charles II of England dies and is succeeded by James II.
1687--Isaac Newton publishes his "Philosophiae naturalis principia mathematica."
1688--William of Orange is invited to England and becomes King William III one year later.
1689--France declares war on England.
1691--The Treaty of Limerick brings to an end the Irish rebellion.
1694--Queen Mary II dies; the Bank of England is founded.
1696--Edward Lloyd begins publishing a newsletter dealing with ships' voyages and cargoes.
1697--Whitehall Palace in London burns down.
1699--William Dampier leads an expedition that visits the northwest coast of Australia.
1701--The War of Spanish Succession begins; William Kidd is hanged in London.
1702--King William III dies and is succeeded by Queen Anne; she approves horse racing as a form of gambling.
1703--Isaac Newton is elected president of the Royal Society.
1705--Edmund Halley predicts the return in 1758 of a comet last seen in 1682.
1707--England and Scotland are united under the name Great Britain.
1710--The English South Sea Company is founded.
1712--The last execution for witchraft in England occurs.
1714--Queen Anne dies and is succeeded by King George I.
1715--A Jacobite rebellion occurs in Scotland.
1717--Handel's "Water Music" is first performed on the Thames; the Grand Lodge of the Freemasons is established.
1718--Bank notes begin to be used for the first time.
1719--France and Spain go to war; Daniel Defoe publishes Robinson Crusoe.

Adventure Hooks
All manner of adventures can begin in London; detailed here are just a few of the possibilities.
Additionally, refer to such Interludes as "The Chase," "The Coffeehouse" and "The Theater" for more ideas regarding the evets that can happen in the city.
Posted by Nate Christen at 7:29 AM