This interlude takes its inspiration from scene in such movies as Pirates of the Caribbean: On Stranger Tides and Cutthroat Island: mounted urban chases. 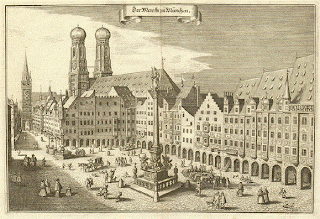 Interlude 44: The Chase 3
Two previous interludes, “The Chase” and its sequel, have presented ideas for adding exciting to scenes invovling pursuit. The first of these focussed on foot chases in an urban area, while the second dealt with large-scale pursuit in the wilderness. This interlude suggests some rules and developments for resolving a chase on horseback in an urban setting, perhaps during a visit to London or some other major city.

Base Mechanic
It's a quirk of the D20 System movement rules that, technically speaking, unless they find a way to change their movement speed, characters with the same speed cannot gain or lose ground to each other; in the same way, a character with a lower speed cannot outrun a character with a higher one. While the system works well for combat in relatively small spaces, it is not so effective for conducting chases. Presented here, therefore, is a method for resolving chases on horseback that does allow the participants to gain or lose ground.

Each round, the characters who are involved should make Ride or Profession (teamster) checks to control their horses. The character with the higher result gains a length, while the character with the lower result loses a length. If the result is a tie, neither character gains or loses ground. In game terms, a "length" is twenty feet of distance for determining weapon range and the like. The GM should determine the lengths of seperation at the start of the chase, and perhaps also determine an amount of separation that triggers the end of the pursuit. For example, if one horse can reach one hundred feet (five lengths) away from the other, the rider can turn down an alleyway and lose a pursuer.

Note that, if the mounts involved have different speeds, the one with the higher movement grants a circumstance bonus of +2 to its rider for each five feet that its speed is higher than a pursuers.

Obstacles
The streets of a city can be crowded, of course, and provide a good way to spice up a chase scene. Consider including some of the following developments.

Other traffic, if it is moving, forces opposed DC 15 checks; those who fail lose a length to their pursuers or quarry. Failure by five or more causes the character to lose two lengths. If the other traffic should be stopped for some reason, the DC of the check increases to 25.

There is always the possibility that a crowd has gathered in the way of the riders. This can be treated in the same way as traffic, with a DC 15 for a normal crowd, such as in a marketplace, and a DC 25 for a heavy one, such as the people gathered to watch a hanging. Additionally, a character who succeeds at a DC 20 Intimidate check can coerce the crowd into scrambling out of the way, thereby eliminating the obstacle.

A common event in movies is that a child wanders into the street. Here the DC for avoiding it is only 10, but failure causes a collision, inflicting 2d6 damage to the unfortunate waif. Villains can always choose not to avoid the kid, of course. The same is the case if two workers carrying something large--such as a painting or a mirror--cross the riders' paths, although the DC for avoiding them increases to 20.

A fountain or similar obstacle provides another chance for characters to display their daring. In this case, a DC 20 Ride check allows a character to steer a horse up and over it, rather than going around it, thereby gaining a length. Failure means that a character doesn't gain a length, and failure by five or more causes a character to lose a length.

Involving Other Characters
Those characters not directly involved in controlling a horse or steering a wagon or carriage can become involved in other ways. For one thing, those who succeed in a DC 15 Knowledge (local) check could think of shortcuts to a given destination, or perhaps recognize chances to steer the chase toward particular obstacles. In a similar way, they might be able to create obstacles for pursuers, such as by throwing a pouch of coins into the road to draw a crowd, loosing a cartload of barrels to create an obstacle and the like. This is a good opportunity for the players to use their creativity, as adjudicated by the GM.
Posted by Nate Christen at 9:56 AM