Recently I've been working more on the Cabal and its agents; this article is the first part of that new material. Hopefully soon I'll have stats for the characters mentioned, too.


The Repository--Lower Levels
Beneath the building that houses an impressive collection of artifacts and antiquities is the headquarters of the organization known as the Cabal. In stark contrast to the open, airy and well-lit building that sits above the ground, the hidden section has low ceilings, narrow passages and a downright medieval feel to it. It is here that the conspirators, in their pursuit of eldritch power, form their plots and plans.
Refer to the appropriate map for the following area descriptions. 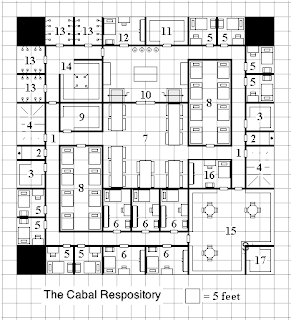 1. Hallways
These passages are only five feet wide, and ten high. Unless otherwise noted, doors leading off from them are not locked. Walls are one foot thick, having hardness 8 and 180 hit points, with a DC 50 required to break through them.

2. Priveys
Each side of the underground level boasts one of these small rooms, based on the medieval garderobe.

3. Storage
The walls of these rooms are lined with shelves that hold myriad contents. In these rooms one can find spare blankets, table linens, candles and the like.

4. Stairways
The stairs here lead up to the main level. Passage between the two levels is barred by stout doors of oak banded with iron; they have hardness 5 and 30 hit points; it takes a DC 25 Strength check to force them.

5. Guest Quarters
These rooms, intended for occupation by visitors to the stronghold, are each furnished with a bed, storage trunk, desk and chair. At any given time there is a 10% chance that a given room is occupied, perhaps by Morisson Kearns Fairmont, Lillian Whitmore, Muriel or Ephraim Grey, or another such operative of the Cabal.

6. Members' Quarters
These rooms are occupied by the acolytes who live in the stronghold. They contain the same furnishings as the guest quarters, along with a wardrobe for storing clothing.

7. Main Hall
This broad, open room sits at the heart of the stronghold. It contains stout wooden tables and benches, and is used for meals, relaxation, meetings and the like.

8. Barracks
Eight beds line the walls of this room, four on a side. Beneath each is a footlocker for holding the occupant's personal possessions. This makes for tight quarters, to be sure, which is why most of the guards only spend time here while sleeping. At any give time, from two to four of the beds are filled.

9. Armory
This is one of the few rooms that is kept locked at all times; only Brother Simon and the guard sergeants have keys to it. Inside there are two dozen muskets and twice that number of pistols, along with powder and shot to fire each weapon twenty times.

10. Kitchen
This is the second largest room in the facility. It boasts two large hearths, each of which has a spit for cooking meat. Two broad tables fill the center of the room, and two more sit against the outside walls. A row of barrels containing water, wine and beer stand against another wall.

11. Larder
More shelves line the walls of this room; they are filled with foodstuffs. What is more, a trapdoor in the center of the floor provides access to the cellar, where perishable items such as meat, cheese and vegetables are kept.

12. Cook's Quarters
This room, where Bert spends his time when not preparing meals or doing other things, is outfitted in the same manner as the members' quarters.

13. Prisoners' Cells
Each of these rooms is also locked in the same manner as the armory. Four sets of shackles are connected to the walls. They are not always occupied, but could hold associates of the PC's if the Cabal has been capturing and interrogating known practitioners of arcane magic.

14. Torture Chamber
A broad table, also with shackles, rests in the center of this room. Along the walls are shelves holding various implements for inflicting pain, including cutting tools, ones for applying heat and the like.

15. Study
This is where the Cabal keeps its collection of arcane tomes, scrolls, tablets and the like. The walls of the room are lined with shelves stacked with such materials, and three sets of tables and chairs provide space for the acolytes to study them. Additionally, a DC 25 Search or Spot check reveals that the section of wall in the outside corner is actually a secret door. What is more, on the wall is a panel engraved with symbols representing the heavenly bodies. Triggering the secret door requires pressing in the different symbols in the correct sequence. What may not be readily apparent, however, is that they need to be pressed in the order of the days of the week named for them: moon, Mars, Jupiter, Venus, Saturn, sun. A DC 20 Knowledge (arcane) or DC 25 Knowledge (religion) check can reveal the association between the planets and the days of the week, but it's up to the PC's to put together this information. 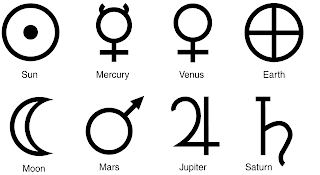 16. Brother Simon's Quarters
Given the power and influence that Brother Simon possesses, his quarters might seem rather Spartan; they are furnished in the same manner as those of his acolytes. This is because the Cabal's real prizes are stored in the vault, as detailed below.

17. Vault
Hidden in this secret chamber are the most valuable and powerful of the Cabal's treasures, including the following items.
As always, the GM should feel free to modify this list of items to suit the needs of the campaign.
Posted by Nate Christen at 6:24 AM