Today's post is an Interlude guaranteed to provide some good roleplaying; the inspiration for it is detailed below. 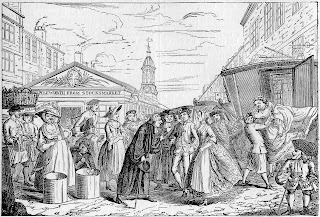 Interlude 41: The Wedding
There are lots of reasons to enter into a marriage. Love, of course, is one, as is unifying two noble houses. According to Maureen Waller in her book 1700: Scenes from London Life, two more practical reasons came into play. One was that, according to English law, women's debts would be nullified upon taking the husband. (The theory was that having debt would make them unmarriageable, something that was to be avoided at all costs.) Another impetus was that women who gave birth out of wedlock could be punished for doing so, and thus they sometimes sought out husbands who could claim the child to prevent suchchastisement. With these considerations in mind, this Interlude presents a situation in which a desperate woman seeks out one of the PC's and proposes to marry him. To make it work best, please keep in mind the following considerations.

Choosing the Bridegroom
The GM should select the recipient of this proposal carefully. While it could be funny to spring this scenario on a prudish character who would be mortified by it, a character who might actually accept is an even better candidate. This might be a PC with a low Charisma score, especially one with bad manners and an ill temper. For that character, this is a rare opportunity to take an (at least first it would seem) appealing wife. Such a candidate is more likely to accept the proposal, and thus to experience the results of such a union. Of course, should the groom prove reluctant, the woman in question might be willing to tell the truth about her circumstances in order to gain his consent.

Conducting the Ceremony
More often than not, unions of this sort were conducted by preachers operating on the fringe of governmental and ecclesiastical law; they would peform the service for perhaps eight shillings, and even provide a legitimate marriage license for another twenty. This is a quick and efficient affair, with litle fanfare. The bride is certainly content with such a proceeding, but the PC groom--and his fellow crew members--might desire otherwise.

Further Developments
Naturally, the wedding ceremony is only the start of the relationship. Once it has been concluded, there are a number of possible events that might occur.