A Relic and an Interlude

Recently I've been researching the history of Florida and the clash between the Spanish and French which occurred there. While doing so, I learned of a plant from the Caribbean islands that was believed to have aphrodisiac effects. I knew that this needed to be adapted as a relic for the bog, but I also knew that it could be a source for its own interlude. 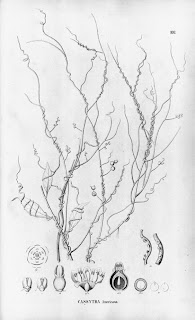 Love Vine Potion
On the islands of the Bahamas, and elsewhere throughout the Caribbean Sea, grows a species of parasitic vine known as the Bahamian Love Vine. According to local legends, it can be used to brew powerful aphrodisiacs. Many settlers dismiss such notions as nothing more than superstition, of course, but those who've spent their lives inhabiting the wild places of the Caribbean know better. There are two subspecies of the vine; the more common one has no romantic influence whatsoever, but the rarer variety is just as potent as reputed.

In game terms, it takes a Survival check, or a Knowledge: nature check, to locate the effective variety of the Bahamian love vine. After that, a Craft: alchemy check is required to process it properly. These two efforts should be treated as a combined DC 50 check, so that a lower result on the first makes the second even more difficult. For example, if a character seeking the vine rolls a 20 for the Survival or Knowledge: nature check, then the base difficulty for the Craft: alchemy effort is 30.

In this way, characters who seek to harness the love vine's power might end up with less effective varieties, but those who really know what they're doing can capture its full potential. Note that the GM may need to adjust the relevant DC's, depending on the abilities of the PC's and NPC's in a campaign.


Interlude 40: The Potion
Much of the time, magical items only help the PC's succeed in their adventures. Sometimes, however, the items become the cause of the adventures. Take, for example, the concoctions that can be derived from the Bahamian love vine. While the lesser varieties have their uses, the actual philter of love can be used to create all kinds of interesting scenarios. A few of the many possibilities are detailed here.
Posted by Nate Christen at 4:39 PM