This post is also inspired by the reading I've been doing about life in England in the 1700's; it's a theater, based on the Globe in London. Not surprisingly, it can provide numerous diversions for a band of pirates.


Interlude 42: The Theater
At the same time that Queen Elizbeth of England was helping to establish her nation as a maritime power throughout the world--aided as she was by such famous captains as Drake, Frobisher, Hawkins and the like--another type of flourishing was taking place in that country. This was the theater, especially the stage plays of William Shakespeare and others. 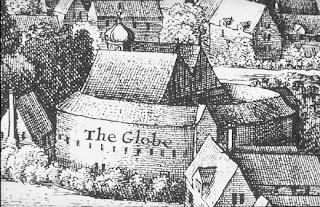 Layout
This theater stands a full three stories in height, with tall outside walls surrounding it like an arena. It is built entirely of wood and open to the sky above, with regularly spaced narrow windows that provide fresh air and sunlight to the cast, crew and spectators alike. 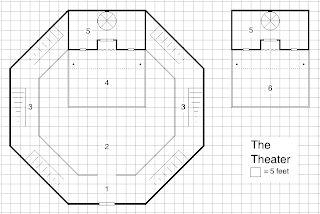 2. Courtyard
This open area has no roof overhead, and the floor is nothing more than packed earth. Visitors may pay a much smaller sum to stand here, and such individuals are known as groundlings.

5. Backstage
During productions, the actors and stage hands who are involved can ready themselves back here, and a show's director is almost always present. The ground level opens directly onto the stage, while the second level features a balcony for certain dramatic scenes. The top level is generally used for storage, including old costumes and props and the like.

6. Under-Stage
In order to make certain special effects work, there are a number of trapdoors that lead down to this area. The spiral stairs from the backstage area also lead down here. 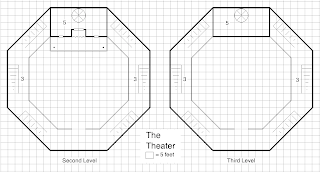 NPC's
Detailed here are just a few of the characters whom the PC's might encounter at the theater.
Director

The director is a strong personality amidst a group of individuals. As such, he can be demanding and controlling--but he is also highly skilled in his craft.
Actor

Each of these actors is an experienced veteran, hand-selected by the director for this production. While the actors all have different personalities, it's a safe bet that they are all dramatic in their own way. As is traditional, they are all men; when a script calls for a female character, one of the men dresses the part.

Using the Theater in a Campaign
The theater could be used in a Skull & Bones campaign in many different ways; a few of the possibilities are detailed here.
Posted by Nate Christen at 7:29 PM