If the image that accompanies this post looks the same as that from the last one, then that's because it's the one from the trade paperback collection of the two arcs, which are at the time of this writing the last ones in the Shadow Roads line.
-Nate 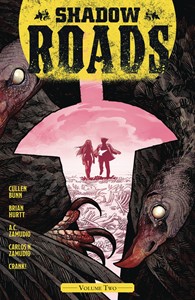 Another short arc, these issues were published in June of 2019 and then, following a delay, in July and September of 2020. Here are my impressions:

Posted by Nate Christen at 4:54 AM