While the development by Disney of a TV series based on the National Treasure movies (2004 and 2007) is not news, I think a couple of recent developments are noteworthy. For one, Disney recently released a first image of the cast members, who seem to have run into some legal trouble. 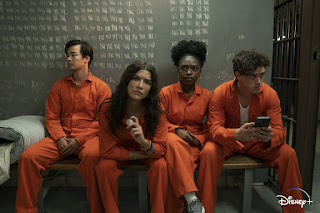 A second bit of news is that actor Justin Bartha will be reprising his role as Riley Poole from the films.

This certainly helps create continuity between them and the TV series. What is more, the fact that his Poole wrote a book, The Templar Treasure and Other Myths That Are True, begins to open up a whole world of possible adventures. Such a book would definitely be a useful plot device for an RPG campaign. It will be interesting to see how the series develops that world, using the long-form pacing that is possible on TV as opposed to the big screen.

Posted by Nate Christen at 7:08 AM