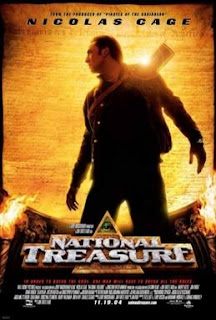 During the pandemic I've been watching a fair number of old movies, since there have been few opportunities to go out and see new ones. Since I've also been working on material for Treasure Hunter Adventures, this list has included National Treasure from 2004. I remember seeing that back when it was released, since I was working on similarly themed material for use with the d20 Modern RPG at that time. While watching it again, I realized that it could provide a good example of pacing in a Savage Worlds campaign. Here's how it would work.

The movie begins with our treasure hunters seeking the wreck of a ship, the Charlotte. We're not told just how they tracked it to a location somewhere around the Arctic Circle, except that Ben learned about this business from his grandfather, and Riley seems to have created an algorithm for doing so. Whatever the case, this drops our heroes and NPCs into this adventure in media res. They break out some metal detectors, find the ship's bell, and start digging. That leads into exploring the wreck and finding the meerschaum pipe, which brings this session's activities to a head. Ian Howe decides to turn against Gates and Poole, there are tense moments and a big explosion, and then the heroes need to figure out how to make their way back to civilization. After all of this, they are definitely due for an Advance.

Session 2—Stealing the Declaration of Independence

This situation starts with some roleplaying scenes in which the heroes try to warn various government agents about the danger to the Declaration, culminating with a visit to Abigail Chase. When that effort fails, they decide to steal it for themselves. There is a good deal of research—which can be adjudicated through a number of skill checks—and then it's time to take action. While Riley works his technical wizardry, Gates goes to the party to steal Abigail's fingerprint and thus gain access to the document. While this plan is unfolding Ian and his goons arrive on the scene, causing a confrontation that leads into a great chase scene. Once again, by the end of the chase, the heroes have escaped and are due for another Advance.

To learn more about the treasure, the heroes take Abigail and the Declaration to visit Ben's dad. In addition to some good opportunities for roleplaying, they can examine the back of the Declaration and find more clues. That reveals an Attendorf cipher and leads a scene in which they employ a kid to retrieve words from the Silence Dogood letters, and what is nearly a confrontation with Ian. After a bit of thinking and shopping, they head for Independence Hall. They recover the special glasses, but are caught up in another chase scene. Ultimately this ends with Gates agreeing to meet Sadusky's people on the USS Independence, where Howe arranges an extraction. Here again there is time to recover, reflect and take a third Advance.

The end of this business requires a visit to Trinity Church, where the characters find an entrance to an underground complex. There is a lot of activity as they utilize a complex, old elevator mechanism, and difficulties erupt while they use it. This leads to what seems like a dead end, and a false clue provided by Ben and his dad send Ian off on a wild goose chase. Next, the heroes solve one more puzzle related to the pipe and find the treasure chamber. After that it's just a matter of convincing the authorities not send anyone to prison, and leading to the arrest of Ian Howe and his associates. There's negotiation of a finders' fee and what to do with the treasure, after which the heroes can take their fourth Advance and thus become Seasoned characters.

Posted by Nate Christen at 5:44 AM