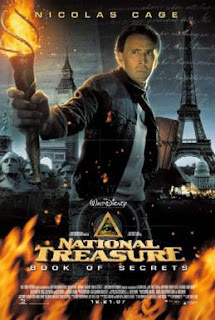 The PDF Treasure Hunter Adventures 4: Mercenaries & Magic discusses the idea of Downtime, the time between adventures when the members of a party pursue their own activities, goals and dreams. Building on that, this article examines how the movie National Treasure: Book of Secrets uses details from the characters' Downtime to add customized details and complications to an adventure scenario. Here are a few examples.

Posted by Nate Christen at 6:18 AM