In the aftermath of the Godsharp Saga campaign, the powers that be in the Sol System begin to coordinate with one another in order to protect against similar threats. For that reason, here is a description of the organization known as the Celestial Council. 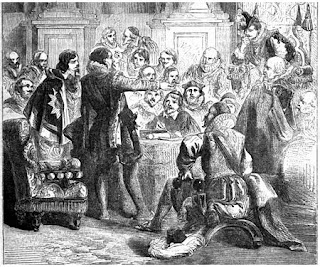 The Celestial Council
In the aftermath of what has come to be known as “The Incident”—an attempt be demons and their allies to destroy Homeworld using an artifact known as the Godsharp—several of the powers that be in the Sol System decided to form an organization “for the purpose of mutual assistance, information and defense.” The members meet four times a year, on the day before each solstice and equinox, to share any news they've heard and to debate any mutual decisions that they might choose to make. The venue for each meeting varies, with different members taking turns in hosting.

Members
Current members of the celestial Council include the following individuals.
There has also been talk of including other members, such as the giants of Wodan, the genies of Freya, and even a representative of the Barbarian Lands on Homeworld. So far, the existing members have chosen to keep the Council small.

Recent Business
Some of the items with which the Council has been dealing include the following.

Posted by Nate Christen at 4:04 PM