Detailed below is a trading compound typical of those used in remote locations by organizations such as the Royal Interplanetary Company; refer to that map for the following location descriptions. 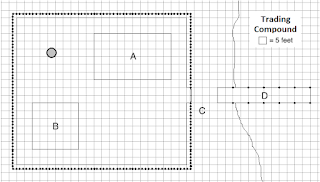 A. Main House
The center of activity in the compound is this two-story building, which is home to the RIC representative and his servants; refer to the map below for a detailed layout. The house's front room (1) is two stories tall, with stairs leading to the upper level. From here, a single door leads into the comfortably furnished sitting room (2), which boasts a sofa and armchairs, along with side tables. Double doors lead to the dining room (3), which is dominated by a broad table and chairs. In the rear of the house is the kitchen (4), with a broad hearth and space for preparing food, and a door leading out the back; it is flanked by the pantry (5) and servant's quarters (6).

The house's upper level consists of bedrooms. Three of them (7) are for visiting agents of the Company and other guests, while the fourth (8), more comfortably furnished, is occupied by the resident agent. All have beds that are comfortable, if not fancy, along with small desks. Finally there is the office (9), with a large desk, bookshelves and a locked, iron-bound trunk. 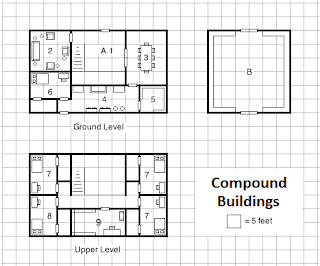 B. Storage Shed
This broad, single-story structure has double doors at both ends, to facilitate moving goods in and out of it. The interior walls are lined with sturdy shelves, and various containers—crates, barrels, sacks and the like—are arranged in the center of the building.

C. Stockade
Walls built from hewn logs surround the compound, fifteen feet in height. There is also a walkway, ten feet in the air, from which guards can watch the surround area and, if need be, fire missile weapons. The only gap in the stockade is a front gate, which can be barred from the inside.

D. Landing
In front of the compound, a pier—ten feet wide and sixty feet long—juts out over the water. The water around it is deep enough to allow longboats and smaller ships, such as dhows and even barks, to dock. Larger vessels, like merchantmen and galleys, must use their longboats to load and unload passengers and cargo.


Using the Trading Compound in an Aetherial Adventures Campaign
This location can tie into all sorts of adventures, including the following possibilities.