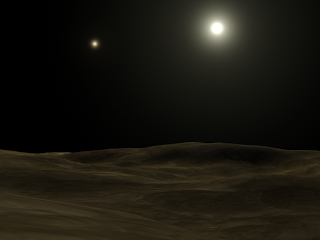 Although the Pathfinder RPG core rulebook provides mechanics for many of the environments that PCs face in traditional fantasy scenarios (see Chapter 13), adventures in space present new types of hazards. To that end, this article details rules for situations such as fluctuations in gravity, temperature and air quality.

Beyond Extreme Heat
This represents the kind of heat one faces when passing too close to a star, or on the surface of worlds with think atmospheres such as Freya. It works similar to the heat rules as detailed on page 444 of the core rulebook, except that characters must make Fortitude saves every round during such exposure. Failure means they suffer 1d6 damage. What is more, flammable objects must also make checks or catch on fire.

Beyond Extreme Cold
While the weather on planetary surfaces can be downright frigid, the depths of space are even colder. This is similar to the rules for cold detailed on page 442 in the core rulebook, except that characters must make Fortitude saves every round or suffer damage.

High, Low and Zero Gravity
Some planets have very little gravity when compared to Homeworld, and deep space has none at all save what is provided by an aethership. Others, of course, have a much stronger pull. These variations act as multipliers on various game mechanics—distance for ranged attacks; movement from Acrobatics checks to jump; carrying capacity; and the like—as detailed on the chart below. For reference, Homeworld's gravity is considered to be the standard when compared to other planets and bodies in space.
Note that movement in zero gravity requires either a surface from which a character can push off, or magical aid from a spell like fly or something similar. What is more, movement and other actions on worlds with crushingly high gravity can become impossible.

Fouled Air/Vacuum
If, for some reason, the air aboard an aethership or in a similar location becomes fouled—such as when the flying sails and wind cordage are damaged by enemy attacks, or when the magic in an elemental obelisk fails—then it should be handled with the same rules used for drowning (see page 445 in the core rulebook). It takes a DC 30 Perception check to recognize that the air is fouled, with a cumulative +1 bonus to that check for every round spent in the fouled air.
Note also that characters who are exposed to vacuum stand a good chance of suffering extreme cold, too.

High and Low Pressure
Just as there are no rules to govern the potentially crushing effects of deep water during exploration of that terrain, this article does not present mechanics for those elements.

Posted by Nate Christen at 9:17 AM