This post continues the previous one, with the lower level of the minotaurs' stronghold. 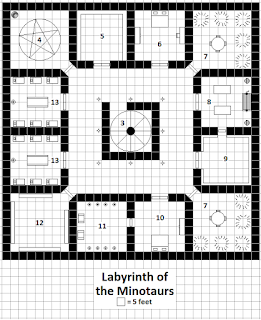 4. Summoning Room
A huge pentagram fills the floor of this chamber. In the far corner stands a statue of Baphomet, demon lord of the minotaurs. Those who use detect magic or similar spells notice a lingering aura of wicked conjuration magic.

5. Storage
The walls of this room are lined with broad shelves; they contain all manner of goods for the upkeep of the stronghold, such as candles and torches, extra bedding, and tools and materials for maintaining both the inhabited rooms and the labyrinth above.

6. Mistress Nora's Bedchamber
In contrast to the rough nature in the rest of the stronghold, this room is quite comfortably furnished. There is a large, luxurious bed, along with a broad wardrobe and a dressing table and chair. It is, of course, the quarters Mistress Nora, the succubus who acts as a saboteur and spy on behalf of the minotaurs and demons.

Mistress Nora: Refer to page 68 in the Bestiary for details.

In addition to various items of diaphanous clothing and expensive toiletries, one can find Mistress Nora's personal treasure, including a hat of disguise, a feather token (whip), a dose of salve of slipperiness and one elixir of love.

7. Minotaurs' Barracks
Crude sleeping pallets line the walls of these rooms, and a rough wooden table and chairs stand in the middle. This is where the ordinary minotaurs spend their time when not engaged in other activities.

Minotaur: Refer to page 206 in the Bestiary for details.

Each minotaur possesses a small amount of hoarded wealth, including 1d20 copper, silver and gold pieces.

8. Kitchen
Two long tables fill the center of this room; beyond them stands an open hearth with a spit for cooking meat. There are barrels of water and wine, too, along with various cooking implements and baskets of other foodstuffs. At any given time, two of the minotaurs can usually be found here, preparing the next meal for their associates.

9. Pantry
Shelves line the walls of this room, too; they are filled with all manner of food and drink, including casks of ale, bottles of wine, jars of pickled fruits and vegetables, baskets of fresh produce, haunches of cured meat, various containers of spices, and the like.

10. Incubus's Bedchamber
The furnishing of these quarters are nearly as opulent as those for Mistress Nora, including a spacious, comfortable bed and a large wardrobe. This is where Cassius the incubus, the leader of the minotaurs, resides.

Mister Cassius: Refer to page 73 in Bestiary 3 for details.

Outside of the items that he carries on his person—notably his keen scimitar +1—Cassius leaves his valuable in the treasury, detailed below.

11. Treasury
The combined wealth of the minotaurs and their demon lords is assembled here, stored in two large chests and a number of urns. It includes 2781 gold pieces, 3811 silver pieces, 1294 copper pieces, a jar of stone salve, a figurine of wondrous power (serpentine owl) lyre of building.

12. Armory
Racks of weapons and armor line the walls of this room, filled with chain shirts and greataxes, heavy crossbows with quarrels and the like. Additionally, the broad space in the middle is kept clear for when the minotaurs or Cassius feel like sparring with each other.

13. Champions' Quarters
In contrast to the crude barracks provided for the ordinary minotaurs, these chambers are furnished with beds, a long table with two benches, and a washstand. Here is where the fiendish minotaurs—born through the intervention of the succubus and incubus—reside.

Half-Fiend Minotaurs: Refer to page 171 in the Bestiary for details.


Using the Minotaurs and their Demon Allies in an Aetherial Adventures Campaign
These foes can provide all kinds of plot hooks for space fantasy adventures, including the following suggestions.

Posted by Nate Christen at 1:55 AM