Using Different Levels of Technology in the Pathfinder RPG 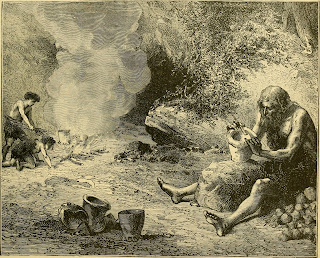 Just as different worlds can give rise to many and varied civilizations and cultures, so too can they have different levels of technological advancement. With that in mind, this article suggests guidelines for determining just what types of equipment are available on any given world based on its development. As always, the GM is the final arbiter regarding life on any given world.

Stone Age
At this early point in their development, the inhabitants of a planet are just starting to learn the use of tools, and even fire. They tend to live nomadic, hunter-gatherer lives, with most of their daily effort dedicating to finding shelter and sustenance. Instead of building their own dwellings, they most likely live in whatever caves or other such locations as they can find. Written language is highly unlikely. Even so, they can create art and even monuments, such as oral legends, cave paintings and roughly worked standing stones. Log rafts and and reed boats are the only watercarft developed.

Bronze Age
Two major developments—the growing of crops and domestication of livestock—have changed life in this period drastically. Because people don't need to invest so much time into finding food and shelter, they have more free time to develop various crafts and other forms of artistry. Those can include writing, probably on clay or even stone tablets, and possibly even parchment scrolls. Pottery is another invention, useful for storing foodstuffs and other goods. Painting and stone carving are more advanced, and the melting of metals such as tin, copper and bronze change the way weapons and armor are produced. Large stone structures, such as temples and pyramids, become possible. Smaller, more primitive sailing vessels such as longboats are first built, allowing for broader exploration.

Iron Age
Now that a process for forging steel becomes available, sentients possess the tools they need to craft all manner of structures and things. This allows for finer work in wood and stone, which goes hand in hand with the creation of more complex tools. Glass also becomes available, as do the more advanced means of tranportation.

Medieval Era
From a material standpoint, this era represents little real change from the Iron Age. For that reason, it can be considered to have the same level of advancement as that period. Historically speaking, it saw little further progress due to the attitudes and outlooks of the people in power.

Renaissance Era
A renewed focus on study and experimentation, aided by the development of paper and a printing process, allows the culture reach new heights in art, literature, crafts and other elements of culture. Exploration becomes more expansive, too, bringing interaction and even conflict between different societies.
Industrial Revolution—And Beyond
While the Pathfinder RPG core rulebook doesn't include rules for steampunk settings or similar worlds, there are plenty of third-party supplements that do. To see just what they might add to a world that has reached such advancement, one should of course refer to those texts.

Posted by Nate Christen at 3:46 PM