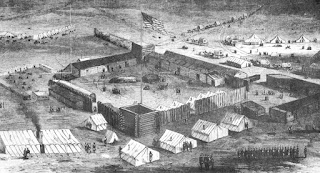 This post presents a frontier fort for use with The Sixth Gun and similar settings. 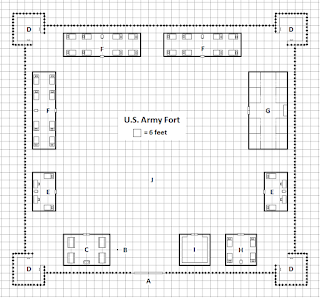 The Grand Tour
Refer to the appropriate maps for the following area descriptions. In general, the fort is surrounded by a wall made from roughly cut logs, which stands fifteen feet in height.

A. Front Gate
Two broad doors of solid wood grant entrance to the fort; they can be sealed with a stout crossbar that requires a Strength test at -4 to break.

B. Flagpole
Next to the mess hall stands the flagpole, on which flies a banner with thirteen stripes and thirty-eight stars. It is the location from which the bugler plays reveille and taps to mark the beginning and end of each day.

C. Mess Hall
Four broad tables, each surrounded by long benches, fill the ends of this small building; a large cooking stove occupies the wall opposite the door, which at almost all times of the day has pots of beans or stew simmering on it or biscuits baking in it. At mealtimes, half of the fort's company can be found here, with the soldiers and officers eating in two separate shifts.

D. Guard Towers
Ladders in each of these corner structures lead up to narrow walkways that are twelve feet off the ground, providing a position from which the soldiers can defend the surrounding wall. One soldiers is stationed in each such position at all times, and more when danger is suspected. Underneath the platforms, these areas can be used for storing extra building materials and other large items.

E. Officers' Quarters
There are two of these small buildings in the fort; the one closest to the mess hall is for Captain Areneson and the company's surgeon, while the one next to the stable is for the lieutenants. Each is furnished with two comfortable beds, with footlockers underneath them, along with a desk and chair and a wood stove for heat.

F. Barracks
Beds line the walls of this long, low building; there is also a woodstove that stands in the middle of the wall opposite the front door. Underneath the beds there are footlockers in which the soldiers store their personal items. Note that the barracks next to the stable is occupied by cavalry soldiers, while the other two are used by infantrymen.

G. Stable
The interior of this building is divided into eight stalls, each of which usually holds a horse. The stalls have troughs for water and fodder, and a shelf on the wall opposite the door holds tack and harness for these animals.

H. Infirmary
Four beds are positioned in opposite corners of this building, and a wood stove provides heat for the place. This is where casualties are sent to be treated by the camp surgeon, or left to recuperate following and operation.

I. Storehouse
Broad shelves line the wall of this room, which is filled with all manner of crates, barrels, sacks and other such containers that hold foodstuffs, supplies and tools, along with spare weapons and ammunition. This is the only building that is usually kept locked; Captain Arneson has the key for it.

J. Drilling Ground
This area is left open, providing a place in which the soldiers can drill or organize themselves for expeditions. In emergencies this area can become a makeshift camp, with tents set up for parties of passing travelers or even extra troops sent to reinforce the regulars.

Personnel
Stat blocks for the soldiers and officers who occupy this fort can be found in another supplement. Detailed here, though, is a little about the major personalities of the place.

Life in the Fort
In spite of the lurid stories told in dime novels back east, life in a frontier military fort is usually repetitive and dull. For the most part, soldiers practice formations and drill with their weapons, along with conducting maintenance, working in patrols to gather wood or water, and the like. While they may see Indians, the natives usually keep their distance. Detailed here, however, are some possible exceptions to that rule.

Posted by Nate Christen at 7:05 AM