The Fire Giants of Wodan, Part 2

Here's the lower level of the fire giants' stronghold. 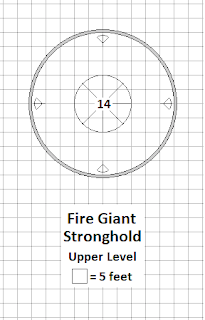 14. Watchtower
From the stronghold's ground level, the spiral staircase leads up through the natural rock and into a tower that rises fifty feet above the surrounding cliff face. At the top it is open to the sky overhead, except for a waist-high (for fire giants) railing along the outside. From here, the two giants normally stationed here watch the surrounding terrain for potential enemies and other developments. What is more, four ballistae are located here in the event that the giants need to stage a defense. 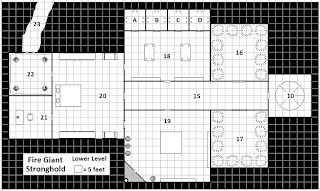 15. Hallway
A broad hallway leads from the base of the staircase to the other rooms on the stronghold's lower level.

16. Troll Warren
The door to this chamber is barred by a locked iron gate (hardness 10 and 60 hit pints; DC 25 to force or DC 30 to open). It is here that the trolls who serve the fire giants in mining activities and other labor. There are piles of straw for their beds, among which one can find odds and ends that they've kept as trophies or tools.

17. Hell Hound Pen
This room is laid out in much the same way as the troll warren, except that it is slightly cleaner. The hell hounds are kept here.

18. Torture Chamber
Two broad tables, with shackles mounted in their corners, occupy the middle of this room. There are shelves on the inside walls, too, filled with various unpleasant implements. On the inside wall there are four cells, each built for three prisoners and sealed with doors similar to those in the troll warren and hell hound pen. A single fire giant can usually be found here, preparing for the next session.


19. Workshop
One corner of this room is filled by a large furnace, used for heating liquids as well as metal items. There are barrels of fuel to one side of it, and a cask of water to the other. In the middle sits a broad work table, and shelves containing esoteric ingredients, tools and the like line two of the walls. The fire giant oracle and/or an assistant can often be found here, along with the tophet that serves as an unsleeping guardian.

20. King and Queen's Bedroom
A huge bed dominates the center of this room; large wardrobes and storage trunks stand against the walls to either side of it. This is, of course, where the fire giant oracle and magmablade take their rest. As such, the wardrobes and trunks contain many of their personal items, including extra sets of clothing along with any treasure items that the giants don't generally carry on their persons. Note, however that the trunks are sealed with good-quality locks (DC 30 to open and DC 25 to break).

21. Meditation Chamber
This rather Spartan room contains only a low table with an incense burner and writing materials, and a seating cushion. It is here that the oracle performs her rituals and other activities.

22. Trophy Room
Tapestries depicting the glories of the magmablade's deeds hang along the walls of this chamber. Additionally, four suits of armor taken from fallen foes are arranged on stands. At the GM's discretion, one or more of these could even be magical—something that is too small for the magmablade to wear, but suitable for the PCs. Additionally, a DC 25 Perception check reveals the secret door that provides access to the escape tunnel (below).

23. Escape Tunnel
This narrow passage, some ten feet wide and fifteen feet tall, provides a means of escape in the event of trouble that's too much for the fire giants to handle. It leads to an exit in the surrounding hillside.


Stronghold Inhabitants
Detailed here are references for those who inhabit the stronghold.

Fire Giants: Refer to page 148 in the Bestiary for details.

Fire Giant Strongarms: Refer to page 58 in the Monster Codex for details.

Ettins: Refer to page 130 in the Bestiary for details.

Hell Hounds: Refer to page 173 in the Bestiary for details.

Trolls: Refer to page 268 in the Bestiary for details. Note, too, that some of these trolls have suffered deformities and mutations as per pages 180-1 in Bestiary 5.

Fire Giant Doombringer: Refer to page 61 in the Monster Codex for details.

Fire Giant Magmablade: Refer to page 60 in the Monster Codex for details.

Tophet: Refer to page 271 in Bestiary 3 for details.


Using the Fire Giants of Wodan in an Aetherial Adventures Campaign
There are plenty of ways that the PCs could interact with these fire giants during a space fantasy RPG campaign; presented here are a few of the possibilities.
Posted by Nate Christen at 6:52 AM