Building on the previous post, here are a map and area descriptions for the djinni's tower, along with suggestions for using that location and character in space fantasy campaigns. 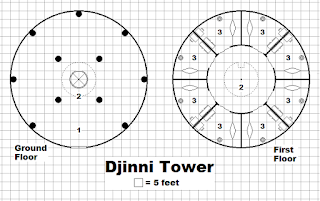 The Tower
This structure, also made from sandstone blocks, rises above the surrounding orchards.

2. Lightwell and Lift
In the middle of the tower is an open space through which light descends all the way from the skylight in the ceiling. There is also a lift, a wooden platform suspended by eight thick chains from a mechanism that is located on the top floor.

3. Guest Quarters
Each of these rooms is furnished with a washstand, a desk and chair, a wardrobe and a hammock. There is an additional set of hooks from which a second hammock can also be strung, above the first one. 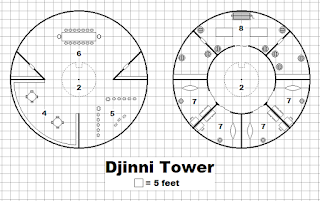 4. Library
Three walls of this room are lined with shelves; they, in turn, are filled with all manner of books, scrolls, tablets, works of art and other items. There are also two round tables, each surrounded by four chairs, at which visitors can peruse texts. Note that this room is also a good opportunity for the GM to introduce new plot elements, such as a piece from an ancient map, a statue with a curious inscription, and the like.

5. Music Room
Numerous cushions are arranged about the floor of this room, providing places for the performers and their audience to seat themselves. If needed, servants can bring low tables for holding instruments, as well as trays with beverages and other refreshments.

6. Dining Room
A long, low table, surrounded by seating cushions, fills the majority of this room. Otherwise it is mostly open, leaving space for servants to bring around food and drinks. There are two storage areas, one on each side, in which are kept such items as linens, extra candles, more cushions and the like.

7. Servants' Quarters
Each of the four Janni employed by Khalid is quartered in one of these rooms; they are furnished in much the same manner as the guest rooms (Areas 3, above).

8. Kitchen
A large stone hearth fills one side of this room; there also two broad tables for preparing food. Various tools, pots and pans, spices and the like hang from the walls. What is more, doors lead to two storage rooms, one for dry goods and one for perishables that is kept cold through arcane magic. 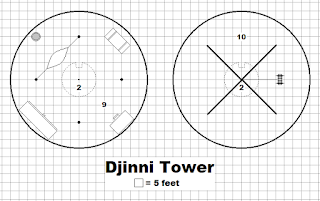 9. Master Bedroom
Khalid's own sleeping quarters are furnished with a hammock, desk and chair, wardrobe and trunk—all sized, of course, for a large creature. The wardrobe contains spare clothing items, while the trunk and desk can be a source for all manner of interesting texts and items (at the GM's discretion). Note, however, that those who might wish to take things without permission must also watch out for the invisible stalker that is the djinni's bodyguard. Additionally, in the event of an attack on the tower, there is a trapdoor that can be raised to seal the lightwell and barred from within (hardness 5 and 15 hit points; DC 18 to break or 25 to open).

10. Roof
At the top of the lightwell stands the mechanism for the tower's lift. It consists of four heavy beams that form an A-shaped structure, from which the basket is suspended on its chain; there is a large crank for raising and lowering it. Four unseen servants that have been made permanent operate the device. Finally, the rooftop is surrounded by an open railing and provides an excellent view of the sky island's grounds.

Khalid the Djinni: Refer to page 139 in the Bestiary for details.

Jann: Refer to page 141 in the Bestiary for details.

Dragonnes: Refer to page 104 in Bestiary 3 for details.

Invisible Stalker: Refer to page 181 in the Bestiary for details.


Using the Djinni of Freya in an Aetherial Adventures Campaign
There are plenty of ways that could become involved in the events of a space fantasy RPG campaign; presented here are a few of the possibilities.