Faction: Disciples of the Destroyer

Here's another faction, this one dedicated to Lamashtu.

Disciples of the Destroyer
This band of fanatics is dedicated to the worship of Lamashtu, the Mother of Monsters. They embrace all of her destructive aspects, in which way she acts as the antithesis to Gaea, the Earth Mother. As such, these ruthless zealots are known to conduct blood sacrifices to honor their patroness, to conduct orgiastic rites in which they hope to spawn more of their kind, and to practice ritual scarification of themselves. In this way they are very popular among all manner of ogres and their misshapen offspring, along with clerics, blackguards and certain types of magi.

Goal: Sacrifice and Destruction
Those who dedicate themselves to the service of Lamashtu seek nothing more than to help others reach the ultimate end of life's cycle—that is, death, and in the most painful and gruesome way possible. In this way they test their own bodies through scarification and even mutilation, a practice that sometimes costs them their own lives.

Alignment: CE
Since they view death as the ultimate and inevitable end of all things, the Disciples care little for any sense of ethics or morality. Instead, they seek to shed blood in honoring the Mother of Destruction, and they compete among themselves to determine who is the most capable of doing so. In that way they establish the pecking order, or hierarchy, of the organization.

Leader
Ultimately the Disciples of Destruction answer to a magus-cleric named Mother Edimmu. Given the violent nature of the organization, of course, details regarding that individual's identity and location are a closely guarded secret. Easier to find are one of the organization's pit-fighting champions, Utukku, and the gladiatorial match promoter, Leopold Kurtz.

Headquarters
While the location of Mother Edimmu is a closely guarded secret, it's easier to find the fighting pit that Kurtz runs on behalf of the Disciples. While this one is located in the Holy City itself, underneath the very noses of the Ptah priesthood, it is typical of others from around Homewold and even on other planets.

Refer to the appropriate maps for the following area descriptions. 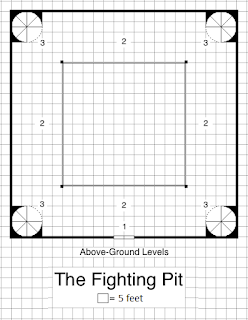 1. Entry
From the outside, this building looks like nothing more than a typical warehouse—a facade that Kurtz carefully maintains. It has walls made of thick mud brick, with double iron-banded wooden doors that provide entrance. There are no windows.

2. Spectator Area
The main floor of the structure, along with each of the upper levels, consists of a broad, open area centered on the fighting pit, which is encircled by a wooden railing. Sconces for torches line the walls, since there are no windows.

3. Stairways
The spiral stairways lead up to additional spectator areas, as well as down to the quarters provided for the faithful and other combatants.


4. Fighting Pit
This area, little more than a hole in the ground with a packed earth floor, is where Disciples and others fight to the death. In addition to numerous bloodstains, doors lead out to the combatants' quarters.

5. Quarters
Each of these small chambers is furnished with a crude but functional bed, along with a table and a couple of chairs. Ordinarily, only combatants and one or two assistants are allowed to occupy them. On occasion, however, certain associates of the Disciples capture wild beasts and bring them to the fighting pit, where they are kept until being unleashed against competitors. (See below for a list of such beasts.) 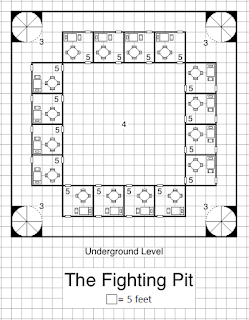 Posted by Nate Christen at 8:12 PM