Presented here are stats and a deck plan for a Chinese junk. 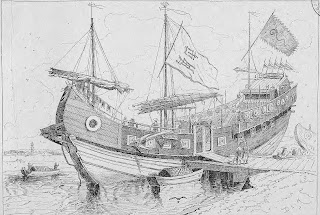 The Junk
Few sights capture the exotic feel of the East, from a Western point of view, better than the ships known as junks. Their distinct type of sails make them stand out from other sailing vessels, while their unusual crews and cargoes hint at the exotic lands from which they hail. The term junk is something of a catch-all, and can refer to many different configurations of vessels. Some people adapt them to serve as houseboats, and in Canton they are even used as floating brothels known as "flower boats."

Junks first came into use during the Han Dynasty (ca. 206 BCE - 220 CE) and were probably first used for voyages at sea during the latter part of that period. Their most notable shared features are sails reinforced by battens, which give them their strength and distinctive shape. They also lack the bowsprit that is common on ships of Western design. Note that the stats and deck plan presented below reflect a moderately sized craft; both smaller and larger variations are certainly possible. Indeed, rivers and ports in China and the surrounding countries are often filled with one- or two-masted vessels, while the fleet of the noted explorer Zheng He included massive seven-masted ships. 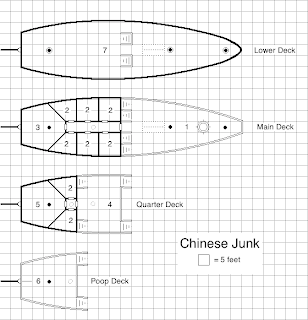 1. Main Deck
This area stands open on the front half of the ship. Here can be found the capstan for raising and lowering the anchor, along with the hatch to the cargo hold (Area 7), the door to this deck's private cabins (Area 2) and stairs leading below as well as to the quarterdeck (Area 4).

2. Private Cabins
Passageways from the main deck and quarterdeck provide access to these quarters. They are used for important personages such as crew officers and special passengers. Lightwells provide illumination in the passageways.

3. Special Cabin
A really important crew member or passenger might be quartered here, a private room with more space and more light than the other cabins.

4. Quarterdeck
This area is raised above the main deck (Area 1), and has steps leading down to it as well as up to the poop deck (Area 6). Note that both of those terms, quarterdeck and poop deck, are Western labels being applied to this ship.

5. Captain's Cabin
The other stately cabin aboard the junk, located just aft of the quarterdeck (Area 4) and more private cabins (Area 2), is here.

6. Poop Deck
With the highest elevation at the stern of the vessel, it is here that the helmsman steers the ship via the rudder.

7. Lower Deck
This is the ship's cargo hold, accessible via stairwells and the main hatch. It is not only used for storage, however, and can easily be fitted with bulkheads to provide more cabins for passengers or crew.
Posted by Nate Christen at 7:54 AM