This post is inspired by Matthew J. Hanson's post-apocalyptic Broken Earth campaign setting for the Savage Worlds RPG--recently funded via Kickstarter--in the playtesting of which I was recently able to participate. It provides an opportunity for some pirates to build a community of their own, with all of the labor and drama that such an endeavor would entail.

Also, I'd like to wish a happy Fourth of July to everyone who celebrates it.


Interlude 46: The Settlement
Depending on how they are regarded in the eyes of the law, the PC's might find it necessary to seek out a place to live where they are beyond the reach of the authorities. Alternately, they might rescue or otherwise assist fugitives who need such sanctuary. Whatever the case, this interlude provides some suggestions for developing a situation in which a group of characters establish a settlement.

Finding a Suitable Location
The first consideration, of course, is to find a place to build the settlement. When doing so, there are a few concerns that should be kept in mind. How remote is it? That is to say, how likely is it that the authorities or other enemies might stumble across it? For example, the Bahamas have plenty of little islands on which to find some seclusion, but they're also quite close to major ports inhabited by Spain, France, England and the Netherlands. On the other hand, locations in the Pacific and Indian Oceans, like Madagascar or even more remote locations, can provide more solitude, although it thus becomes more difficult to resupply a settlement. 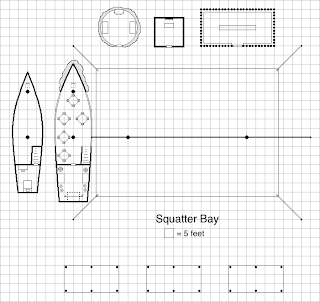 If people are going to live in this place, they need to have a roof over their heads. To that end, their are a number of options open to the PC's. Refer to the appropriate maps from the scenario "Reprisal" and the article "Squatter Bay" for examples of the kinds of simple structures that could be easily built. It takes Profession: woodcutter and Craft: carpentry checks to build them. Indeed, PC's with relevant skills could lead the others in building their new homes. Additionally, it could be interesting to lay out the community, to plan other structures like a meeting house, tavern, warehouse or the like. 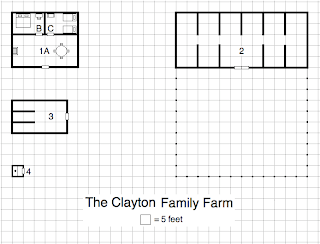 In theory, the GM could set a value on the structures, and then use that to determine just how much time and work are required to build them. This could be come tedious. Perhaps a better option is simply to record the result for each structure built, so as to have a comparison of their relative qualities. 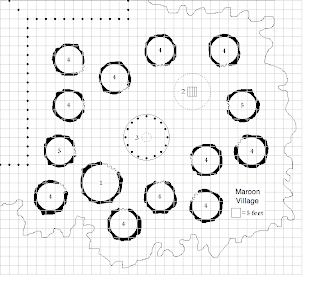 Securing Sources of Food
This is perhaps the biggest concern facing any community. There are a few skills that could help accomplish this, such as Profession: farmer, fisher, hunter or rancher. These apply, of course, to growing crops, catching fish, tracking and killing game or raising livestock. Here again, it might become disinteresting to provide a table with check results and the amount of food created by each. Rather, the results of checks by the PC's--while exploring various options--could again represent who is able to provide the most food and how.

Providing Income/Revenue
In the event that the community is not self-sufficient, as far as food is concerned, it could be necessary to have an alternative sources of funding. One option, if the PC's are involved, is that they could pay for it with the spoils of their piratical exploits. Another option is that the inhabitants could produce useful goods by using such skills as Craft: basketweaving, leatherworking, pottery or weaving; or Profession: brewer, miner or tanner. These are, of course, in addition to the subskills mentioned above.

Establishing Defenses
More important, in the event that unwanted visitors should ever find the settlement, are the precautions and preparations made for fending off an attack. These could include a number of factors, such as the following.
Of course, it's impossible to know just how successful these preparations are, unless an attack occurs.

When Drama Ensues
All kinds of problems could ensue while the settlement is being established; a few of the possibilities include the following options.
The GM should, as always, tailor these developments based on the actions of the PC's and the personalities of notable NPC's.

Connecting This Interlude to Other Events
This interlude could connect to elements from previous adventures in the Come Hell and High Water campaign, including some of these options.
Posted by Nate Christen at 10:16 PM