One of the unfortunate but undeniable aspects in the history of the New World is the institution of slavery. It was a business that destroyed lives and exploited human beings, subjecting them to toil without reward and brutal punishment for trying to regain their freedom.

In roleplaying games, however—and especially in ones with a focus on historical piracy—slavery does have one benefit: it provides a good group of enemies and opportunities for the heroes. Vessels carrying slaves across the Atlantic provide good targets for pirate raids, and the repercussions of such actions can make for hours of thrilling and engaging adventures. For this reason, detailed here are the deck plans for a fairly typical slave ship.

Note: In game terms, use the stats for a schooner (as presented in the Skull & Bones and Corsair books) to represent this type of ship. The exception is that slave ships generally were not armed, although that certainly could change if the PC's were to come into possession of one of them. 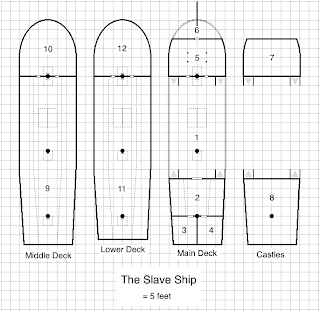 Deck Plans
Refer to the appropriate map for the following location descriptions.

1. Main Deck
This broad open space is generally unremarkable, except that it provides access to other parts of the ship. From here, stairs lead up to the fore- and sterncastles, and a wide hatch opens to the cargo decks below. There are also ladders leading belowdecks, and doors to the rear compartment for officers and the crew quarters before the mast.

2. Special Hold
Just aft of the main deck is this small chamber, with shelves for holding prisoners. Some captains kept specially chosen prisoners here to serve as “bellywarmers,” although the area could just as easily be converted into extra cabins for passengers.

3. Captain's Cabin
By far the most comfortable quarters aboard the ship is this, usually with a comfortable bed and a table for studying charts and taking meals, and perhaps even a wardrobe against one wall.

4. Mates' Cabin
Depending on the number of lower-ranking officers on board, this room usually contains a double bunk and another table, along with sea chests for holding personal items.

5. Crew Quarters
A surprisingly large number of hammocks are hung in this area, providing places for ordinary crew members to sleep. There are also a profusion of sea chests for individual possessions, creating something like a hive in which, at any given time, at least half a dozen people are sleeping. Another ladderwell leads from here to the mess and cargo hold, below.

6. Bowsprit and Head
This area sits in front of the forecastle, open to the wind and spray. The ship's toilets are located here, and it is from here that the ship's bowsprit protrudes.

7. Forecastle
Most of the time, this area serves little purpose other than providing a place from which to watch the passing sea. In times of battle, however, it can function as high ground, and at the GM's discretion a ship might carry a couple of swivel guns mounted near the stairs to deal with boarding parties or unruly cargo.

8. Sterncastle
This raised platform is a center of activity when it comes to sailing. Crew members man the ship's whipstaff here, steering the vessel. The captain or a mate is also often present, setting the course and shouting orders to the crew.

9. Upper Hold
Two rows of wooden shelves line the walls of this area, providing extra space for the ship's human cargo. This makes for really tight quarters; most slaves can sit up, but not stand, and are crammed in shoulder to shoulder with their fellows. The smell of sweat and other bodily functions is overwhelming.

10. Storage and Mess
Foodstuffs are kept in this room, which is ventilated by the sea breezes so that the smell of the cargo hold is not so strong. There is also a small but effective kitchen, allowing for the preparing of the rough meals that serve to keep the crew and passengers functioning.

11. Lower Hold
This area is set up in the same way as the upper hold, above, except that it is darker and receives even less fresh air.

12. Cargo Hold
Any non-living cargo is stored here.
Posted by Nate Christen at 8:05 AM